Hiroshige Utagawa  歌川 広重 (1797–1858), also known as Hiroshige Andō, is considered one of the most accomplished Japanese printmakers and landscape artists, along with Katsushika Hokusai (1760–1849). He specialized in fūkei-ga “landscapes” and meisho-e “scenes of famous places” with innovative compositions, vivid color and atmospheric perspective.

Ryogoku Bridge and the bank of the Okawa by Utagawa Hiroshige

Ryogoku Bridge and the bank of the Okawa by Utagawa Hiroshige (Japan, 1797-1858). A timeless design from one of the masters of Ukiyo-e design. From the series 100 Famous Views of Edo. Published by Uoya Eikichi between 1856-1858. 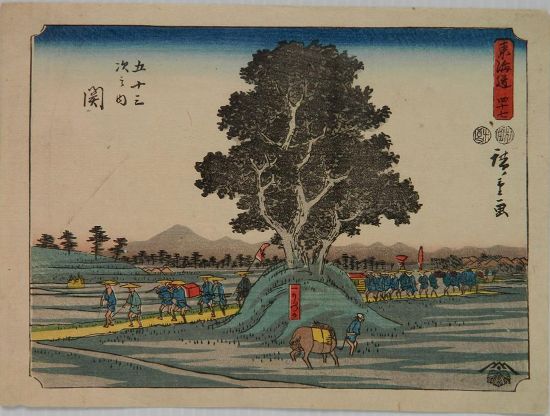 Seki by Ando Hiroshige (Japanese 1797-1858) Edo Period Japanese Woodblock Print. Printed in circa 1850. From the series 'The Fifty-Three Stations of the Tokaido', published by Tsutaya Kichizo.

Fireworks over Nihonbashi Bridge by Ando Hiroshige (1797-1858) Japanese Woodblock Print. Also known as "Cooling off at Ryōgokubashi Bridge" from the series Famous Places in the Eastern Capital. Printed circa 1840. These are the left two panels of a triptych. 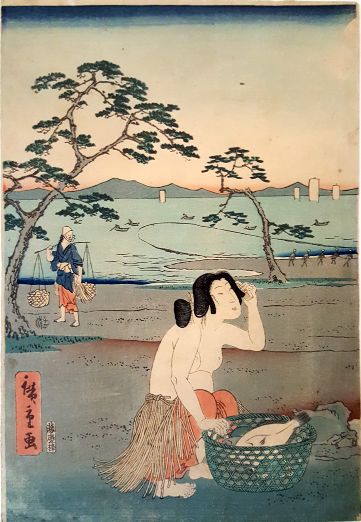 Water Scene at Wakasa Province by Ando Hiroshige. Beautiful original Hiroshiget print depicting a woman grooming by the water with villagers in the background.

Size: 14" h x 9" w
Condition: Very good for age. Some slight fading to the bottom of the print. Small spots on the left and right. Slight loss to the top left margin.

Hiroshige Utagawa  歌川 広重 (1797–1858), also known as Hiroshige Andō, is considered one of the most accomplished Japanese printmakers and landscape artists, along with Katsushika Hokusai (1760–1849). He specialized in fūkei-ga “landscapes” and meisho-e “scenes of famous places” with innovative compositions, vivid color and atmospheric perspective.

Hiroshige was born with the name Tokutaro Andō in 1797 in Edo (modern-day Tokyo). Around the same time as the death of both his parents in 1809, the 13 year-old Hiroshige assumed his father’s position in the Tokugawa Shogunate fire department, according to Edo period custom. His interest in art motivated him to apprentice under the ukiyo-e master Utagawa Toyoharu (1735–1814) from 1811, while continuing his work at the fire department until 1823. Utagawa was the most prominent school in printmaking during the Edo Period (1603–1868), specializing in vibrant, commercial prints of actors, images of beautiful women, famous places, and legends and myths that came to define the ukiyo-e genre. Hiroshige’s tutelage in the Utagawa atelier included study of Kanō and Shijō traditions of Japanese painting, Northern and Southern Chinese painting, and woodblock printmaking. The artist was officially adopted into the Utagawa school in 1812, which enabled him to take the artist name, Hiroshige Utagawa, and eventually focus solely on the landscape genre. His early work consisted of book illustrations and designs for prints portraying actors and beautiful women in a typical Utagawa school style that responded to popular market trends.

By the early 1830s, Hiroshige began to produce series of famous places that exhibited his talent in landscapes, soon to be his signature subject matter. His first landscape series, Eight Famous Views of Omi (ca. 1829/30), incorporated bird’s-eye, one-point perspective and cropped elements in the foreground, influenced by his teacher Toyoharu. In 1832, he made his first trip down the Tokaido Highway, joining an official procession sent by the Shogunate to deliver gift horses to the emperor in Kyoto. Hiroshige created 55 color prints based on sketches from the journey for the series Fifty-three Stations of the Tokaido (1833–34), which earned him widespread acclaim. It would be a subject that he would return to frequently throughout his career, producing over 16 editions of the Tokaido series in total.

Hiroshige’s immediate rise to fame motivated him to concentrate on landscapes that captured the ethos of each place, including details of people and animals in addition to the natural scenery. His exceptionally skilled depictions of atmospheric conditions of snow, rain, and mist made his work particularly admired. Hiroshige also often revisited the cityscapes of his hometown Edo (the largest city in the world at that time) series that culminated with his masterpiece One Hundred Views of Famous Places in Edo (1856–1859). The series had a profound impact on the Japonisme movement in France and influenced the work of artists around the world, including Claude Monet (1840–1926), Edgar Degas (1856–1859) and Vincent Van Gogh(1856–1859).

Hiroshige produced countless noteworthy landscape series including Famous Places of Kyoto (ca. 1834), Famous Places in the Sixty-Odd Provinces (1856–1858), and Thirty-Six Views of Mount Fuji (1852). He also sometimes collaborated with other Utagawa school artists to showcase his expertise in landscape. For example, for the series Sixty-Nine Stages of the Kisokaido (1834–1842) Hiroshige designed the landscape while Keisai Eisen (1790–1848) completed the figures. He also designed impressive bird and flower prints, drawing on earlier lineages of Chinese and Japanese painting and his observations of nature. In the late 1840s and 50s, Hiroshige also completed numerous triptychs of beautiful women. He trained a number of pupils who took his name, although none gained the same degree of prestige. In 1856, Hiroshige became a Buddhist monk and continued producing prints until succumbing to cholera in 1858.

The moon has been a significant character throughout Japanese history dating back to as early as the Asuka period when Buddhist inspired art began to feature the sun and moon together as a popular theme. The moon not only represented a strong harvest, but also provided a form of personal enlightenment, solitude and appreciation of beauty. As the popularity of ukiyo-e grew during the Edo period, the artistic interpretation of the moon became easily accessible to regular citizens as this artwork was mass produced, and even extended it's influence into Western artists including Van Gogh and Monet. In this post, I have included selections of Japanese art featuring the moon from the Ukiyo-e, Shin Hanga and Sosaku Hanga movements.