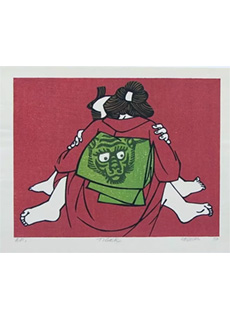 Clifton Karhu (United States, 1927-2007) was one of the most popular American post-war woodblock sōsaku-hanga artists living and working in Japan. Karhu dedicated his life to understanding Japanese art, culture, and customs, which he illustrated in his modern and geometric woodblock prints. 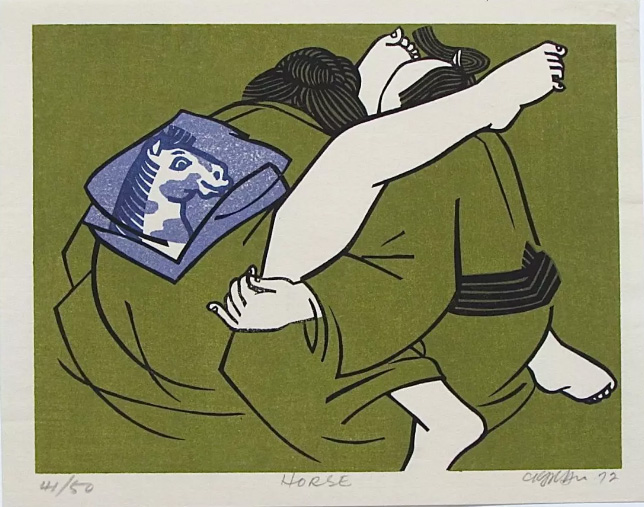 Horse Zodiac by Clifton Karhu. From The Twelve Animals of the Zodiac series. Dated 1972. Pencil signed and numbered by the artist. Limited edition 44 of 50. 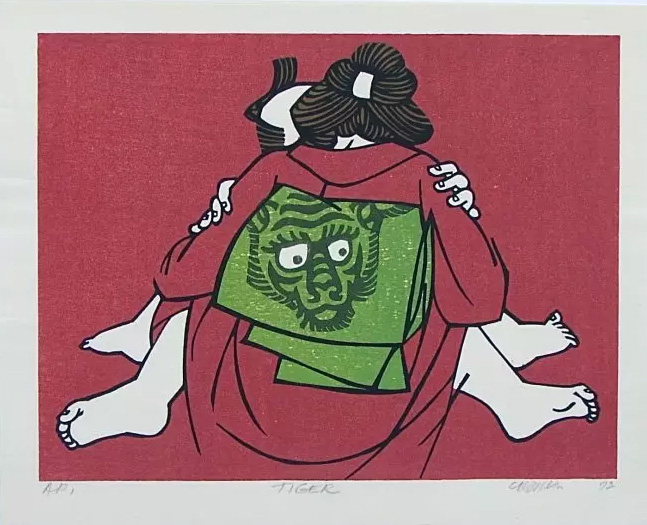 Tiger Zodiac A.P. by Clifton Karhu. From The Twelve Animals of the Zodiac series. Dates to 1972. Pencil signed by the artist. Artist print. 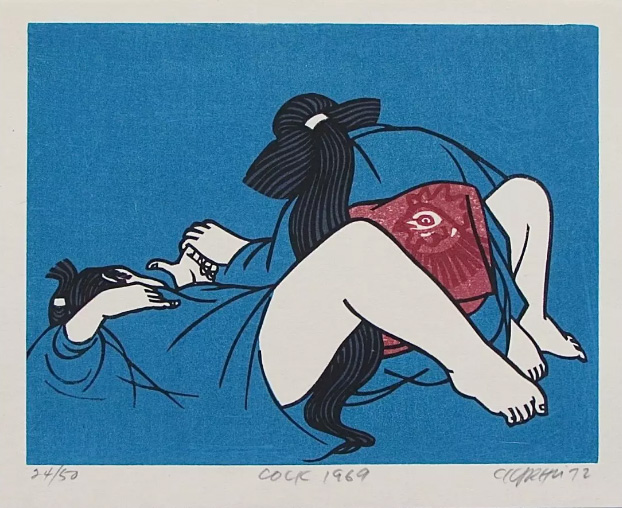 Cock Zodiac by Clifton Karhu. From The Twelve Animals of the Zodiac series. Dated 1972. Pencil signed and numbered by the artist. Limited edition 24 of 50.

Clifton Karhu (United States, 1927-2007) was one of the most popular American post-war woodblock sōsaku-hanga artists living and working in Japan. Karhu dedicated his life to understanding Japanese art, culture, and customs, which he illustrated in his modern and geometric woodblock prints.

Clifton Karhu was born in Duluth, Minnesota on November 23, 1927. Karhu began drawing at a young age, taking cues from his parents who were painters. In 1946, Karhu joined the American Navy and was stationed in Sasebo, an American Navy base near the cities of Nagasaki and Fukuoka, Japan. In 1948, Karhu returned to the States and attended the Minneapolis Art School from 1950 to 1952.

The young artist returned to Japan after his time studying as a missionary for the Lutheran church. Karhu traveled to Kyoto, Shiga, and Hiroshima selling Bibles. However, he became more interested in leading a life as an artist and resigned from his missionary work. Karhu took up watercolor and oil painting and showed his work in regional Japanese exhibitions. In 1961, he won First Prize at the Chubu Taiheijo Bijutsu Kyokai Ten (The Middle Pacific Artgroup Exhibition). He also held his first solo show at the Shin Gifu Gallery in the Gifu prefecture. In 1963, Karhu moved to Kyoto, a bustling city with a prominent art scene and reputation in Japan. In Kyoto, the artist began creating woodblock prints. He exhibited them at Yamada Gallery in 1964, which was well received by critics. This time marked the beginning of Karhu’s success as a Western artist and printmaker making woodblock prints based on the style and techniques of traditional and modern Japanese art. Soon after his success at Yamada Gallery, Karhu showed his prints at numerous exhibitions in Japan, North America, and Europe.

Karhu was a sōsaku-hanga (creative print) artist, meaning he designed, carved, and printed his work, as opposed to traditional Japanese methods of producing prints, which were under the jurisdiction of a publishing house. Artists like Karhu demonstrated individualistic and creative liberties to design and produce their own desired work. Karhu created prints that depicted traditional and old Japanese homes, temples, rooftops, and towns, especially the modern landscape of the city of Kyoto. In an interview about his work, Karhu shared, “In Kyoto the vertical and horizontal lines of the tile roofs and the latticed windows strike a special harmony, like something alive. In my prints of Kyoto, I always strive to express this human warmth. Since wood accounts for much of Kyoto’s beauty, it may also be the best way that beauty can be expressed - through woodblock prints.” Karhu was interested in showing architecture and social realism that he observed on a daily basis. Karhu’s prints consistently use a minimal, modern, and refined color palette as well as bold shapes, outlines, and unusual perspective to illustrate architecture and its spaces.

Karhu became a sort of artistic celebrity in Japan. His artwork was mass-produced and printed on commercial objects like t-shirts, calendars, and other merchandise and home goods. Some art critics in response to the artist’s work reduced Karhu’s prints as being too decorative. However, Karhu was not fazed by the mixed reviews. He had already found major success and was one of the most sought after post-war woodblock artists. Collectors of his work included the former United States Vice President Hubert Humphrey and actress Shirley MacLaine.

Clifton Karhu passed away from lung cancer on March 24, 2007, at age 90 in Kanazawa, Japan. His work can be found in numerous collections and major museums worldwide including the Museum of Fine Arts in Boston, Harvard University Museums, Cincinnati Art Museum, Kunst Museum in Salzburg, and the National Gallery of Australia in Canberra.