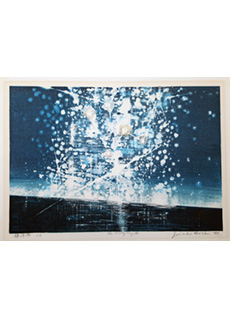 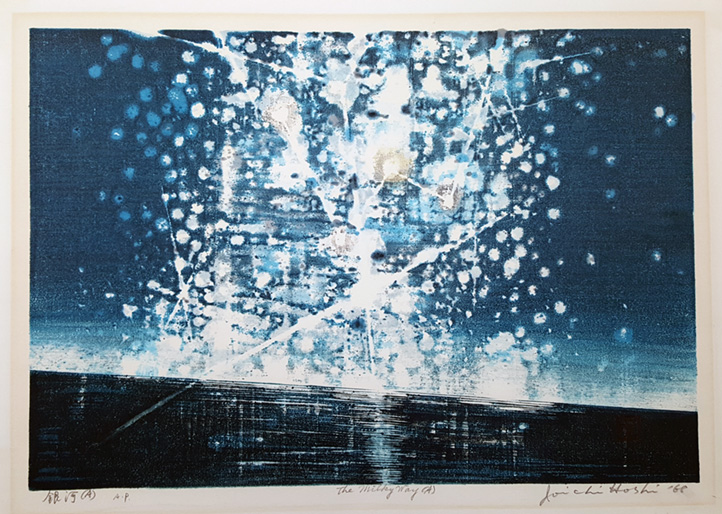 The Milky Way A by Joichi Hoshi

Hoshi was born in the northwestern prefecture of Niigata, Japan. He attended secondary school and a teacher’s college in Japanese-occupied Taiwan where he continued to work as an elementary school teacher for 13 years. Following the end of World War II, Hoshi repatriated to Japan in 1946 and began a study of oil painting and mimeograph print techniques.

In the late 1940s, Hoshi began to teach himself woodblock printmaking through his membership with the Japanese Woodblock Print Association. His skill was quickly recognized with an award at the Association’s Print Exhibition in 1949. By the time he had graduated from the Musashino University of Fine Arts in 1956 at the age of 42, Hoshi had earned numerous accolades from National Artists Associations as well as an international following through his participation in the Tokyo International Print Biennales of 1960, 1962, 1964 and 1966, and the International Print Bienniales and Trienniales in Geneva in 1966, San Paulo in 1967, London in 1968, and Italy in 1971. His inclusion in an exhibition of Japanese print artists at the Oklahoma Museum of Art in 1966, and a tour of Japanese prints artists in 1969, in particular, garnered him admiration among American collectors.

Hoshi’s early prints feature luminous, abstract compositions of the night sky and constellations. The intricate detail and sophisticated treatment of color are testament to Hoshi’s technical acumen as both a designer and printer. He began to concentrate on his singular, magical realist tree motifs in the 1970s. These elaborate, meticulous depictions of trees are incandescent against vividly-colored, monochromatic backgrounds and often include details of gold and silver leaf. In the final years of his life, Hoshi also began a series focusing on grasses. The artist’s quiet dreamscapes continue to inspire printmakers to take up trees as subject matter earning him the moniker “the father of tree prints.”