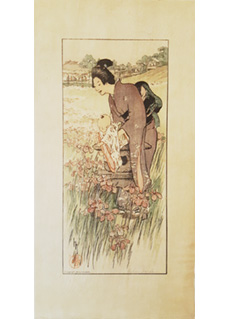 Helen Hyde (1868-1919, U.S.A.) was a revolutionary American printmaker who spent most of her career living in Japan before and during the era of Japonisme. She is well-known for her color etching and woodblock prints depicting women and children and domestic settings.

In Their Holiday Clothes by Helen Hyde

While in Paris in the late 1800's, Helen Hyde was exposed to the Japonism movement which captured her imagination. Inspired, she relocated to Japan in 1899 and studied the Japanese method of color woodblock printmaking for the next 10 years.

Many of her works capture the experiences and joy of childhood. In this work, the scene depicts a Chinese family in their traditional holiday clothes. A father carries his youngest daughter, while his oldest stands by his side. The father looks down with a prideful gaze. The older daughter is wearing the traditional Qipao style outfit, while the father wears a Tangzhuang style jacket. A beautiful glimpse into historical Chinese holiday traditions. 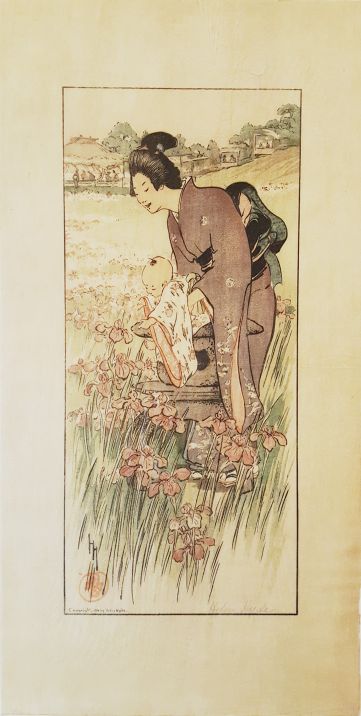 A Day in June by Helen Hyde

A Day in June by Helen Hyde. Color woodblock depicting a beautiful summer scene in rural Japan. Pencil signed by the artist. Marked with a copyright of 1910. Helen Hyde's chop mark can be found in the bottom left of the print. The work is printed on very thin paper which has a textured quality to it.

This is the cover work featured on Tim Mason's book Helen Hyde. Also referenced within the book as #85.

A Summer Girl by Helen Hyde

Over the Garden Wall by Helen Hyde

Over the Garden Wall by Helen Hyde (American, 1868-1919) color woodblock print. Beautiful image depicting a young child peering over a cactus wall in Mexico. Printed in 1912. Referenced in Mason and Mason, 100. Signed in pencil by the artist.

Helen Hyde (1868-1919, U.S.A.) was a revolutionary American printmaker who spent most of her career living in Japan before and during the era of Japonisme. She is well-known for her color etching and woodblock prints depicting women and children and domestic settings.

Helen Hyde was born in Lima, New York but moved to San Francisco with her family at age 12. In 1886, Hyde attended the California School of Design and learned under painter Emil Carlsen (1853-1932). Two years later, she enrolled at the Arts Students League in New York for a year and studied with painter Kenyon Cox (1856-1919). In 1890, she traveled to Europe and took courses at the Hoschule für Bildende Kunst in Berlin and worked for the painter Franz Shabira (1849-1910). She also spent time studying in Holland, England, and in Paris with painter Félix Régamey (1844-1907) who introduced her to Japanese art during the spark of the French Japonisme movement. Also at this time, Hyde visited the École des Beaux-Arts that included works by Mary Cassatt (1844-1926), a popular female artist who painted scenes of mother and child and was also influenced by Japanese art. In 1984, Hyde returned to San Francisco and began illustrating children’s books and selling prints based on scenes of children in San Francisco’s Chinatown through Macbeth Gallery in New York City. Hyde also joined the Sketch Club in San Francisco, an association of professional female artists. Through the Sketch Club, Hyde met printmaker Josephine Hyde (no relation, dates unknown). In 1899, both artists traveled to Japan to study the traditional Japanese sumi-e ink painting and etching. In Japan, Hyde aided Japanese printmakers in exchange for knowledge of woodblock techniques. She also apprenticed with European artists that lived in Tokyo like Austrian printmaker Emil Orlik (1870-1932).

Hyde began creating her own prints with full control over the printing process and final print without the jurisdiction of a publishing house, a popular practice known as sōsaku-hanga (“creative print”). Hyde was financially independent and never married, which at the time was almost unheard of. She relied on her art production in order to lead a comfortable life and worked almost nonstop to continuously print new work. Hyde marketed her work to art dealers in San Francisco and New York apart from living in Tokyo. In total, Hyde produced 67 woodcuts in editions of no more than 200 and sold all of them. In 1901, her print A Monarch of Japan was awarded First Place at the Nihon Kyokai exhibition. Additionally, Hyde received a Gold Medal at the Alaska-Yukon-Pacific Exhibition. By 1914, she had sold and signed approximately 16,000 prints, which allowed her to travel to countries like Mexico, China, and India. In 1916, she had a solo show at the Chicago Art Institute, which was well received. Critics lauded Hyde’s prints, highlighting the printmaker’s craftsmanship ability to handle colors as elegantly and finely as earlier Japanese masters and her contemporaries. A majority of Hyde’s prints depicted landscapes, domestic scenes, and women and children. Of course, during her extensive time in Japan, Hyde included the landscapes and architecture of Japan and traditional Japanese clothing. However, Hyde opposed creating prints of the Japanese geisha like other Japanese and Western male printmakers. She believed only depicting women in as geishas suggested women were only good for the purpose of solely being beautiful. Like Mary Cassatt, Hyde generated an interest in depicting women in various states of life, especially motherhood.

Hyde had lived in Japan from 1899 to 1914, approximately 15 years. Hyde spent so much of her adult life in Japan that she considered the country her “home.” The increase in industrialization in Japan, though, made the artist weary of the cultural shift that was happening in the country. Galleries in Japan and America also became disinterested in traditional works of art due to the emergence of modern and abstract art. A decline in the sales of her prints and a diagnosis of cancer in 1914 impacted her ability to live in Japan and travel to and from the States. In 1915, she returned home to Pasadena, California but spent some time traveling in the U.S. and living in Chicago for a short time. Hyde was a member of the Printmakers Society of California, the Chicago Society of Artists, Chicago Society of Etchers, and the Société de la Grauvre en Colour (Society of Color Engraving) in Paris.

In 1919, Helen Hyde passed away almost 5 years after her move back home at age 51. Hyde’s extended family donated her prints, tools, and other archival material to multiple museums, including the California Historical Society. Her work can also be found at the Museum of Fine Arts in Boston, the de Young Fine Arts Museum of San Francisco, and the New York Public Library. The Library of Congress and Smithsonian American Art Museum in Washington, D.C. also holds a vast portion of Hyde’s work. In recent years, art historians and critics have pushed for Hyde’s work to be re-evaluated and shown. Hyde’s legacy demonstrates the art world and the public’s interests in American and Japanese printmakers as well as turn-of-the-century female artists like Hyde.