Paul Jacoulet (France, 1896-1960) is a French artist known for his eloquent synergy and hybridity of the two great artistic cultures of Japan and France.

Pecheur de Sawara,Japon by Paul Jacoulet (France, 1896-1960). Pencil signed and sealed by the artist. Printed in 1936. Mandarin Duck seal. Limited edition numbered 331 of 350. Looking close at the print you will notice that the background lacks black outlines as Paul Jacoulet designed the background without the use of a key-block. Reference: Miles # 33. 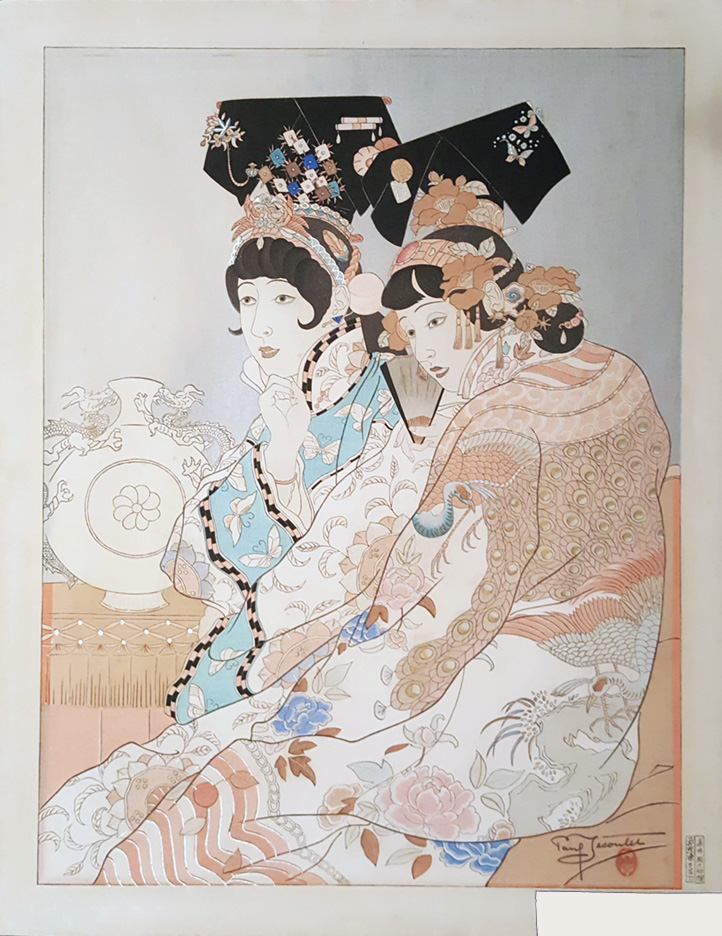 Paul Jacoulet (1896-1960) is a French artist known for his eloquent synergy and hybridity of the two great artistic cultures of Japan and France.
Paul Jacoulet was born in Paris in 1896. He moved to Japan with his parents when he was 10 years old. His father Frédéric Jacoulet was a university professor hired by the Japanese government to teach French to young aristocrats. From an early age, Jacoulet showed promise with his intellectual and artistic abilities. By the time he was 16 years old, he spoke Japanese, French, and English fluently. Isamu Noguchi’s mother, who was Jacoulet’s neighbor at the time, helped the young artist learn English. Jacoulet also studied painting and printmaking under artists Kuroda Seiki (1866-1924), Fujishima Takeji (1867-1943), and Ikeda Terukata (1883-1921) when he was just eleven years old. Under Terukata Ikeda (1883-1921) and his wife Shoen (1888-1917), Jacoulet also mastered the techniques of bijin-ga (paintings of beautiful women). He also took dancing lessons and studied gidayu (narrative chanting to the accompaniment of shamisen musical instrument), in which he attained almost professional-level proficiency. Jacoulet set his sights on a career in politics and public service when he accepted his first job with the French embassy in Tokyo. However, his poor health forced him to resign. In 1921, he began his career as a dedicated full-time artist.
In 1929, Jacoulet created his first prints after undertaking his first trip to the South Sea. Jacoulet’s first published prints, which appeared between 1934 and 1935, were 10 works grouped under the title Genre Prints from Around the World. The series comprised portraits of seven Micronesians, one Japanese, one Korean and one French woman, and included his first color print, Young Girl of Saipan and Hibiscus Flowers, Marianas. Further travels inspired more prints with a strong focus on portraits of natives. It wasn’t until after World War II that Jacoulet began to stray from popularized pre-war realism into surreal and fantastical subjects.
Jacoulet was a proficient ukiyo-e printmaker. Dating back to the 17th century, ukiyo-e prints feature theatre performers (kabuki), beautiful courtesans, landscapes, and scenes from history and daily life. Jacoulet is also associated with the Shin Hanga (New Print) movement that sought to revitalize Japanese print tradition by introducing Western realism and new subject matter. It can be reasonably argued that Jacoulet shouldn't be compared to European prototypes. Having spent most of his childhood and adult life in Japan, he was more like his fellow Japanese contemporaries. Jacoulet, like the Japanese artists at the time, modernized their traditional prints by shin-hanga. Jacoulet was also a sōsaku-hanga artist, acting as his own publisher and supervising every aspect of the printing process and final print. In 1931, Jacoulet created the Jacoulet Institute of Prints in order to self-publish his work. Jacoulet was also a superb colorist, exerting direct control over the mixing of the colors and the printing of his designs. Jacoulet used as many as 300 different blocks for a single print. Jacoulet is also known for using hand-made paper and gold, silver, platinum, mother of pearl, mica, and powdered semi-precious stones as additions to the prints. The notch cut in the corner of the paper represents a registration cut for aligning the paper during printing. The verso contains either the print's edition number stamp or the elaborate P.J. stamp. Jacoulet also credited the carvers and printers he worked with by including their names in the margins of the prints. Jacoulet’s commitment to maintaining the integrity of the woodblock print as an art form was demonstrated by his pursuit of perfection. He ensured only high quality work was produced. Therefore, he maintained an active involvement throughout the printing process.
In 1941, Jacoulet moved from Tokyo to Karuizawa during the Second World War where he lived and worked till his death in 1960. Although many of his prints were sold by subscription, he sold a number of prints to American military officers stationed in Japan. Jacoulet was known internationally during and after his life as the “Frenchman of the Woodblock Print.” He was most productive from 1939 to 1960 when he produced exceptional studies of Japanese nationals in indigenous dress. Beside his art, Jacoulet was known for his unique individuality and personal expression, often dressing in a silk kimono and adorning oshiroi (“honorable white”) rice powder make-up and touches of color on his lips. He is known today for specifically highlighting various sexual orientations and concepts like gender fluidity, which are apparent in some of his work. Jacoulet liked to host lavish parties and invite his guests to see his studio and process. However, due to his expressive personal eccentricities and physical differences, the internationally known artist was refused a visa to enter the United States on his final world trip. In 1960, Paul Jacoulet died of diabetes at age 58.
Paul Jacoulet produced as many as 166 print designs in addition to an excess of 3,000 watercolors and drawings over the course of his career. Some of Jacoulet’s collectors included President Truman, Pope Pius XII, Greta Garbo, and Queen Elizabeth II. A catalog raisonnée of Jacoulet’s work titled The Prints of Paul Jacoulet was compiled by Richard Miles and published by Robert G. Sawyers. Jacoulet’s work is widely revered but rare because Jacoulet produced editions that were relatively small in number. In 2011, an exhibition of Paul Jacoulet’s oeuvre was held at the Bibliothèque Nationale de France in Paris. Jacoulet’s work is far more than merely westernized interpretations of the East. His professional success in Japan and his adaptation to Japanese culture and life makes him a highly unique and incomparable figure in twentieth century art history. Paul Jacoulet’s work can be found in numerous international collections and major museums including the San Antonio Museum of Art in Texas, Honolulu Museum of Art, Saint Louis Museum of Art, Fine Art Museum of San Francisco, Museum of Fine Arts Boston, Yokohama Museum of Art, National Museum of Korea, Tokyo Fuji Art Museum, British Museum, Victoria & Albert Museum, and the Louvre in Paris, among others.