Ansei Uchima is a Japanese artist specializing in woodblock prints which combine Eastern and Western art forms. Originally born in California in 1921, he didn’t move to Japan until he was 19. He went to school and studied traditional Japanese printmaking, as well as painting. It wasn’t until after World War II that he was introduced to creative print movement or, sosaku hanga, when working as a translator for an American print collector, Oliver Statler.

Garden Impression B by Ansei Uchima

Flow and Grass by Ansei Uchima

Two Spheres in Space B by Ansei Uchima

Two Spheres in Space B by Ansei Uchima. (American/Japanese, 1921 - 2000). Woodcut in colors on paper. Signed and dated by the artist in pencil lower right. Dated 1971 - 73. Limited edition numbered 1/30 in pencil at lower center. Titled in pencil at lower left.

Between Silences by Ansei Uchima

Summer Stream by Ansei Uchima (American/Japanese, 1921 - 2000). Japanese woodblock print. Penci titled “Summer Stream”. Signed and dated in the lower right by, Ansei Uchima 1962. Limited edition numbered 196 out of 200 and there is a blind stamp in the upper left corner. 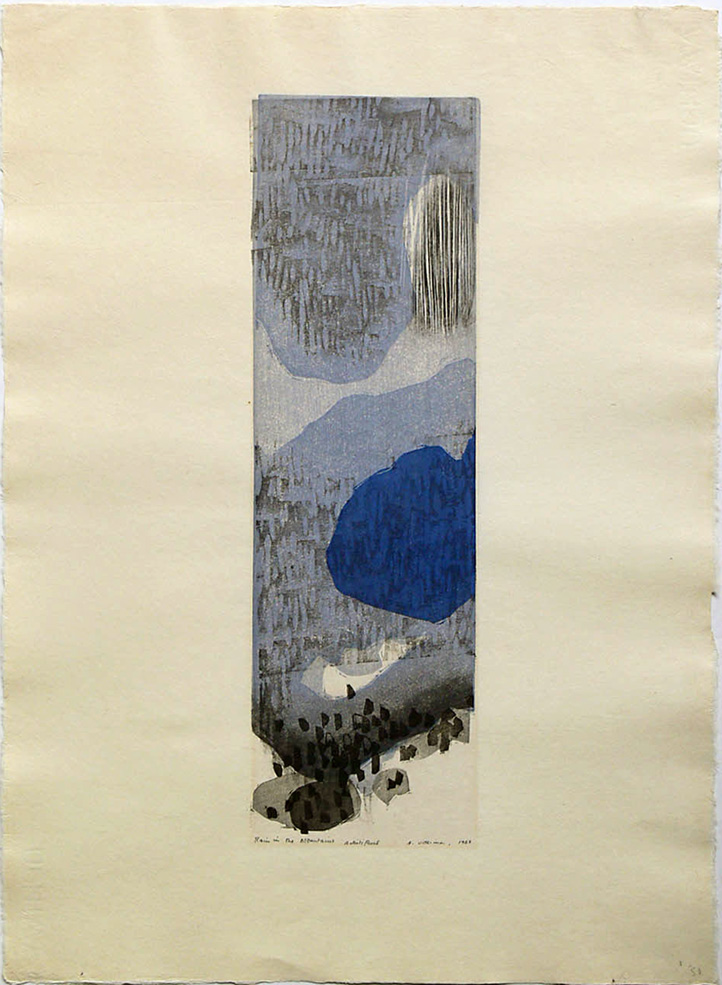 Rain In The Mountains by Ansei Uchima

Rain In The Mountains by Ansei Uchima. Pencil signed and titled by the artist. Limited edition numbered Artist Proof. Dated 1963.

Size: 18" w x 24" h
Condition: Very good. Slight yellowing to the handmade paper. Two small pieces of tape on the back at the top where it was secured to the mat. 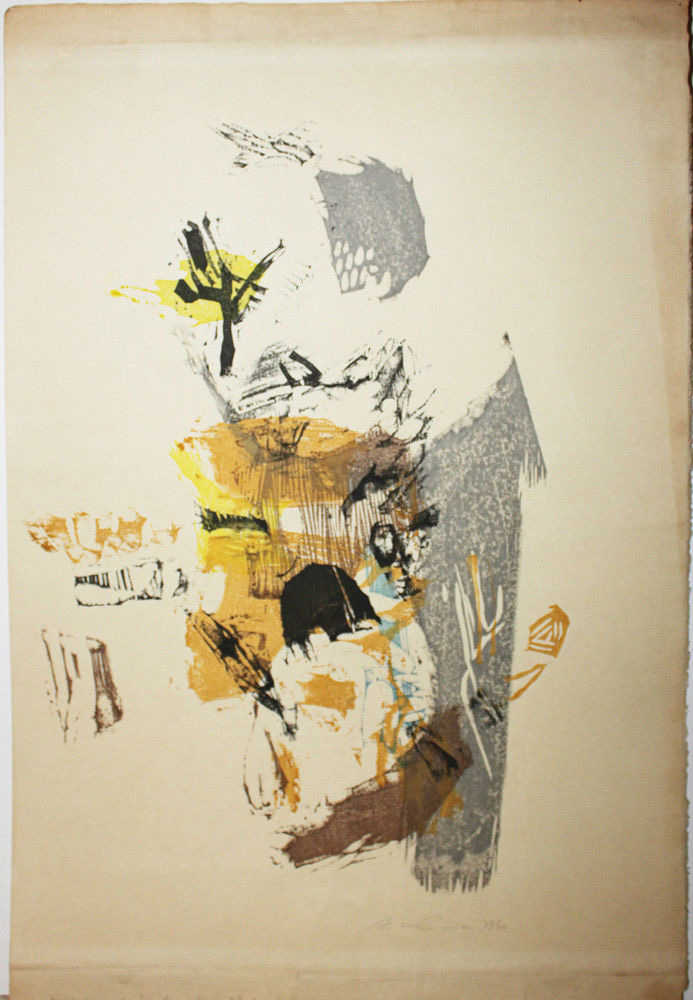 Footsteps of Winter by Ansei Uchima

Footsteps of Winter by Ansei Uchima. This image depicts a mysterious multilayered composition with yellow, orange, black, and grey creating suggestions of familiar shapes. Uchima was known for his abstract color woodblocks; This is a fine example of his work in beautiful condition. Pencil signed and titled by artist. Dated 1960. very small limited edition print numbered 7 of 12.

Ansei Uchima is an artist I have had a keen interest in since I came across my first work of his titled "Footsteps of Winter". This piece reflects a complex multi-layered composition implying the complexity of a natural winter landscape where snow mixes with the natural habitat to create a beautiful new environment. At the same time, to me, it has an emotional undertone which touches on the complex emotions associated with this colder and darker time of year. At times filled with so much joy, and at other times with touches of sadness and nostalgia. 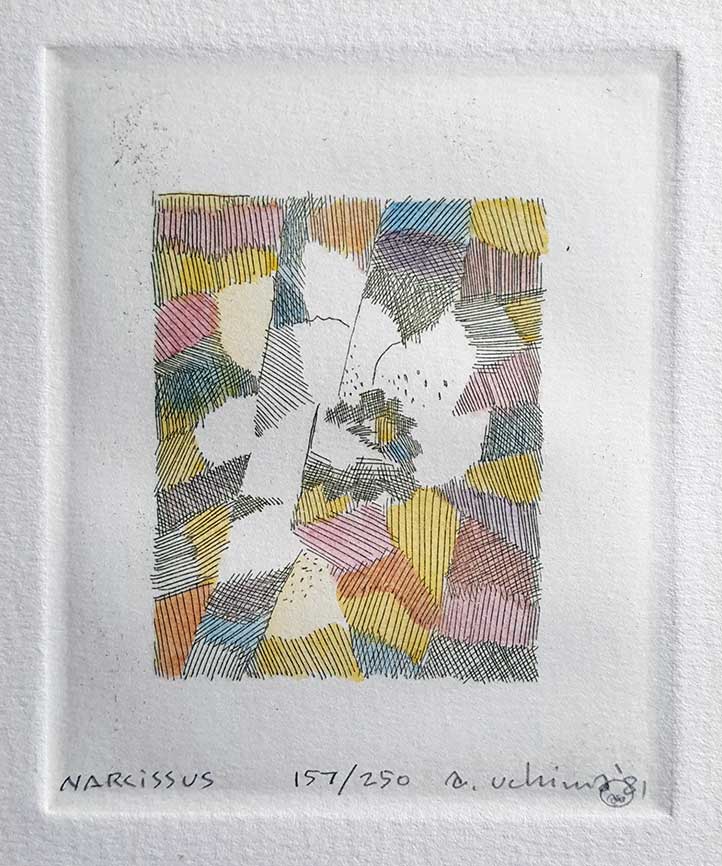 Narcissus by Ansei Uchima. First exhibited at a one man show of Mr. Uchima's work at the Yoseido Gallery in Tokyo during the summer of 1981. Each etching in this limited edition was hand tinted by Mr. Uchima and is therefore unique. Edition 157 of 250. Printed in 1981.

Cube and Distance by Ansei Uchima

From Space Series (B) by Ansei Uchima

From Space Series (B) by Ansei Uchima. A beautiful abstract woodblock print. Pencil signed and titled by the artist. Dated 1972. Limited edition numbered 21 of 100.

Size: 20 3/8" h  x 7" w
Condition: Average. Image and impression is in good condition. There is wrinkling in the bottom margin.

Ansei Uchima (内間 安瑆, Japan, 1921-2000) is a Japanese-American artist known for his harmonic and vibrant prints and paintings.

Ansei Uchima was born in Stockton, California and raised in Los Angeles, California. In 1940, at the age of nineteen, Uchima traveled to Tokyo to study architecture at the Waseda University. After his studies, Uchima gravitated toward painting as a profession and gained artistic perspective from prominent Japanese masters. Uchima also worked as a translator for the art collector Olivier Statler (1915-2002), who had a civil service position with the U.S. Army in Japan. Statler was writing a book about modern Japanese woodblock printmaking, specifically sōsaku hanga (creative print) art. Uchima accompanied Statler as a translator for interviews with sōsaku hanga artists. Naturally, Uchima received first-hand exposure and knowledge of sōsaku hanga and began practicing the process of hand carving and printing the woodblocks. However, Uchima used Japanese paper made specifically for him by a Japanese master papermaker, Ichibei Iwano. Uchima’s first prints were influenced by nature and traditional Japanese interpretations of balance and harmony. This was the beginning of Uchima’s experimentation with printmaking, which caught the attention of collectors in Japan and abroad.

In 1950, Uchima returned to the United States. Two years later, he began teaching at Sarah Lawrence College in Bronxville, New York where he worked from 1962 to 1982 as professor emeritus. His work is best described as Abstract Expressionism. As a Japanese-American who lived and worked in Japan and New York during his formative artistic years during and after the Second World War, Uchima’s works are a direct representation of modern Japanese printmaking aesthetics and the Abstract Expressionist movement in the U.S. He embraced spontaneity during the process of printing and found opportunity with accidents and experimental failures in some of his final pieces - an artistic attitude reminiscent of American Abstract Expressionists. Uchima is known to have advanced traditional techniques derived from ukiyo-e printmaking into what he called “weaves of colors.” This approach was used for his series Forest Byobu where he layered 45 color plates to create one print. Uchima’s prints, including the ones in Forest Byobu series, embody a frenzied movement and repetition. However, his works demonstrated a serene and nuanced quality. Uchima was able to organize these moving shapes and marks in space to evoke an overall balance in composition and space. Uchima also created prints depicting animals, women dressed in kimonos, plants, and scenes of nature. The artist utilizes three to four colors in each design - a simple yet bold approach. Uchima’s other prints depict mountain ranges or abstracted landscapes radiating with atmospheric light.

Uchima’s paintings won awards at the Jiyo Bijutsu (Free Artist Association) annual exhibitions in 1953 and 1954. In 1955, Uchima showed in his first solo exhibit at Yoseido Gallery in Tokyo. Later in 1957, Uchima shared an exhibition at Yoseido Gallery with the sculptor Masayuki Nagare (1923-2018). He also showed his woodcuts in the Tokyo International Print Triennials in 1957 and 1960. In 1967, Uchima became an adjunct professor of printmaking at Columbia University. After twenty years of teaching, he was named professor emeritus in 1988 at Columbia. Uchima also became a Recipient of Guggenheim Fellowships in 1962 and 1970. The artist had over 40 solo shows in his lifetime and exhibited alongside Toshiko Takaezu (1922-2011) and Isamu Noguchi (1904-1988). He also wrote a book about his experiences and techniques titled Thirty Years: My Journey with Woodblocks (1982).

Ansei Uchima was married to the artist Toshiko Uchima (1918-2000) for many years. He died at age 79 on May 9, 2000 in New York. His works are included in the collections of the Metropolitan Museum of Art, Whitney Museum, Art Institute of Chicago, Brooklyn Museum, British Museum, Rijksmuseum in Amsterdam, National Museum of Modern Art, Tokyo, and the National Gallery of Art in Washington, D.C, among others.