Chizuko Yoshida (Japan, 1924-2017) is a Japanese modernist known for her abstract expressionist, surrealist, minimal, and naturalistic prints. In 2014, Chizuko was one of five artists included in the exhibit "Breaking Barriers: Japanese Women Print Artists 1950-2000" at the Portland Art Museum in Portland, Oregon, United States.

Sounds In The Night by Chizuko Yoshida

Sounds In The Night by Chizuko Yoshida (Japan, 1924-2017). A dynamic Sosaku Hanga Japanese woodblock print depicting the abstract concept of Sounds In The Night. Dated 1953. Signed in pencil by the artist in the margin. Originally from the Yoshida Family Collection.

Windows by Chizuko Yoshida (Japan, 1924-2017). A beautiful Sosaku Hanga Japanese woodblock print depicting an abtract view out of a window. This is one of those works where you gain new personal insights into the design everytime you look at the print. Dated 1954. Signed in pencil by the artist. Originally from the Yoshida Family Collection.

March by Chizuko Yoshida (Japan, 1924). A beautiful abstract Sosaku Hanga Japanese woodblock print. Self-printed in 1953 by the artist. Printed on washi paper with a mica effect which adds an engaging intrigue to the design. Originally from the Yoshida family estate.

Freeze by Chizuko Yoshida (Japan, 1924-2017). A beautiful abstract composition depicting frozen sheets of ice and the unique color reflections emanating from them. Pencil signed, titled and dated by the artist. Dated 1955. Originally acquired directly from the Yoshida family.

Autumn by Chizuko Yoshida (Japan, 1924-2017). Signed in pencil by the artist. Printed in 1955. A beautiful abstract interpretation of autumn. This print comes directly from Ayomi Yoshida (Chizuko & Hodaka's daughter).

Tenryu-ji Garden by Chizuko Yoshida (Japan, 1924-2017). Sosaku Hanga Japanese woodblock print. Printed in 1953. Signed, titled and dated in pencil by the artist. One of Chizuko's early prints, printed around the time that Chizuko and Hodaka were married.

Jazz by Chizuko Yoshida (Japan, 1924-2017). Signed and titled in pencil by the artist. Printed in 1954. A beautiful abstract interpretation of jazz music. This print comes directly from Ayomi Yoshida (Chizuko & Hodaka's daughter).

Butterfly A by Chizuko Yoshida

Butterfly A by Chizuko Yoshida (Japan, 1924-2017). Japanese woodblock print depicting an abstract composition of a butterfly. Pencil signed and titled by the artist. This impression was printed in 1953. Artist seal in the bottom right hand corner. Acquired directly from the Yoshida family estate.

A beautiful abstract interpretation of a butterfly. Chizuko uses an off-colored sheet of handmade Japanese paper for this print. The off-colored sheet, in combination with the vivid colors used to depict the butterfly, makes for a layered composition that is both engaging when looking at the work as a whole, as well at its individual parts. Titled "Butterfly A", to me this indicates to be the original essence of Chizuko's "Butterfly" series which she produced later in her career.

Rain by Chizuko Yoshida (Japan, 1924-2017). This is one of Chizuko's earlier woodblocks completed right around the time that Chizuko and Hodaka were married. Dated 1953. This print is signed, titled and dated in pencil by the artist. This print comes directly from Ayomi Yoshida (Chizuko & Hodaka's daughter).

A beautiful abstract piece where you can feel the joy and wonder in the rain. It almost feels like the rain is dancing among the city lights. 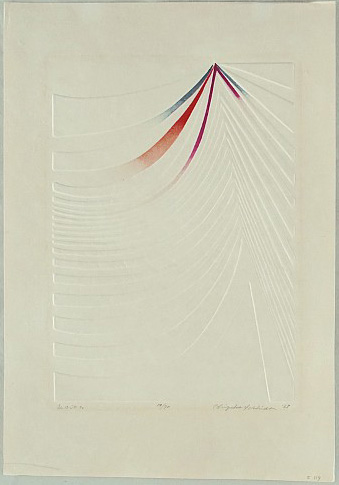 Start of the Water by Chizuko Yoshida

Start of the Water by Chizuko Yoshida. "Mizu Hajime ni" (Start of the Water). It looks like the point from which the water is flowing. Pencil signed and titled by the artist. Dated 1968/ Strongly embossed with a 3-dimentional effect. Limited edition numbered 19 of 70.

Chizuko Yoshida (吉田 千鶴子, Japan, 1924-2017) is a Japanese modernist known for her abstract expressionist, surrealist, minimal, and naturalistic paintings and prints, which include her famous depictions of butterflies.

Chizuko Yoshida was born in Yokohama, Japan on March 20, 1924 to art collecting parents. At a young age, she learned dance and music before she took up watercolor painting in high school. Chizuko also interned at the studio of Kitaoka Fumio (1918-2007) where she practiced oil painting and was exposed to woodblock printing. Chizuko attended classes at the Hongo Art Institute, but her time there was cut short due to the ongoing Second World War. Chizuko evacuated to the town of Ayoama. However, after the war, Chizuko moved back to Tokyo and resumed oil painting. The artist joined two art coalitions in the late 1940s: Taiheiyō-Gakai (Pacific Painting Society), an art group created by her future father-in-law Hiroshi Yoshida (1876-1950) and artist Ishikawa Toraji (1875-1964) in 1902, and Shuyōkai (Vermilion Leaf Society), an artist group for women oil painters, established by Fujio Yoshida (1887-1987) (Hiroshi Yoshida’s wife) in 1920. In 1949, Chizuko was made an associate of Taiheiyō and exhibited with the group. She also met her husband and fellow artist, Hodaka Yoshida (1926-1995), through Taiheiyō. Shortly after marriage, the couple traveled to New York, Hawaii, and Mexico. Around this time, Chizuko focused more on printmaking than painting as her chosen medium.

In the late 1940s, Chizuko began to take part in Seiki No Kai (Century Society), a group of avant-garde artists, writers, and intellectuals who met regularly to discuss art theory and criticism. Okamoto Tarō (1911-1996), a prominent Surrealist painter and critic, led the sessions. Through Okamoto Tarō’s teachings, Chizuko was exposed to the idea of moving away from academic realism. She adapted international modernist principles and learned to blend Japanese cultural traditions with this new style. Overall, Tarō’s influence gave her valuable artistic leverage. However, Chizuko stands apart from other Japanese artists by creating a diverse body of work throughout her life and career. She was known for experimenting with printmaking medium and techniques, understandably because she was trained initially as a painter. Chizuko also liked to blend abstract and naturalistic subject matter into one work, unlike artists who dedicated themselves solely to abstraction. Her husband’s influence also complimented her artistic practice, likewise with Hodaka. Chizuko’s early art alludes to visual interpretations of design and music. Over time, her art progressed into depictions of natural phenomena and the paradoxes of nature. She portrays these images through elements of repetition, color, and balance. Chizuko is most famous for her prints that depict butterflies, which would sell out as soon as they were exhibited or put on market.

After moving back to Japan from America in 1956, Chizuko co-founded the Joryū Hanga Kyōkai (Women's Print Association) of nine professional women printmakers, which included Minami Keiko (1911-2004), Iwami Reika (b. 1927), Enokido Maki (b. 1938), Shishido Tokuko (b. 1930), and Kobayashi Donge (b. 1927). In the early 1960s, Chizuko started to print large-scale architectural forms and Japanese calligraphy designs. She also began utilizing embossing (raised relief images on paper), which gave her prints intriguing visual depth. In 2014, Chizuko was one of five artists included in the exhibit "Breaking Barriers: Japanese Women Print Artists 1950-2000" at the Portland Art Museum in Portland, Oregon, United States.

Chizuko Yoshida passed away from natural causes on April 1, 2017. Chizuko is survived by her two children with Hodaka Yoshida - Ayomi (1958-), a woodblock and installation artist and Takasuke (1959-), a jewelry designer. Chizuko’s work can be found in major collections like the Yokohama Museum of Art in Japan, British Museum, Art Institute of Chicago, Philadelphia Museum of Modern Art, and the Tokyo International Museum of Modern Art.

This online guide provides digital access to the original prints, contextual photographs, and informative texts that were mounted as part of the special exhibition, The Yoshida Family: An Artistic Legacy in Prints. Click on the thumbnail images below to learn more about the individual works of art and archival documents included in the installation.