Fumio Kitaoka (北岡 文雄, Japan, 1918-2007) is known as one of the most important 20th century, post-war sōsaku-hanga (creative print) artists. Kitaoka helped popularize this method of wood engraving with his brightly colored abstract and realistic designs.

In The Pond by Fumio Kitaoka

Lake Mashu by Fumio Kitaoka (Japan, 1918-2007). Sosaku hanga Japanese woodblock print depicting the famous Lake Mashu in Hokkaido Japan. Excellent use of the woodblocks to create the wave effect in the water. Signed, titled, dated and editioned in pencil by the artist. Editioned "Artist Proof". Dated 1967.

The Snowy Country by Fumio Kitaoka

The Snowy Country by Fumio Kitaoka (Japan, 1918-2007). Beautiful sosaku hanga Japanese woodblock print depicting a rural snow scene in Japan. The contrast of the bleak winter colors, with the warmth of the house and people, create a perfect contrast. You can feel your presence there, almost like you're watching it out of your window. Signed, titled, dated and editioned in pencil by the artist. Dated 1970. Limited edition numbered 50 of 100.

Condition: Good color and impression. Mat burn and some staining to margins. Tape remnants to verso.

Washington D.C. by Fumio Kitaoka (Japan, 1918-2007). Modern sosaku hanga Japanese woodblock print depicting a colorful street scene in Washington D.C. featuring a row of townhomes with a young girl playing in the shade of the trees. A beautiful composition with a sense of freedom and joy. Editioned "Artist Proof". Titled, signed, editioned and dated in pencil by the artist. Dated 1966. 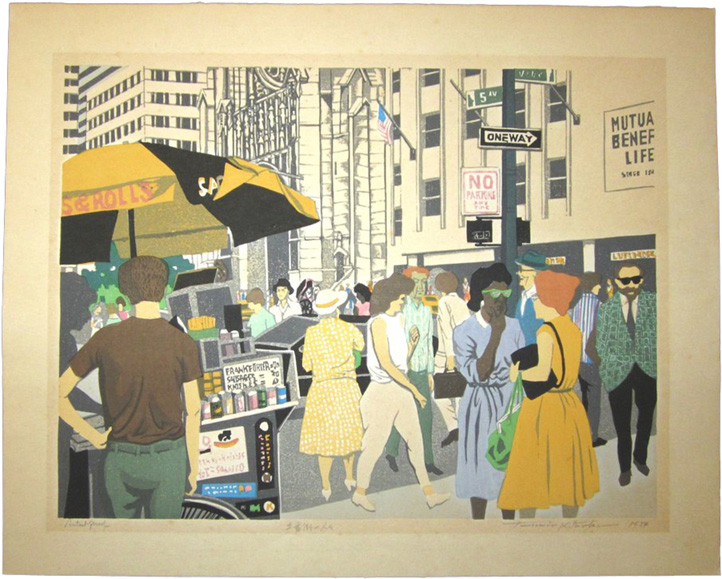 Fumio Kitaoka (北岡 文雄, Japan, 1918-2007) is known as one of the most important 20th century, post-war sōsaku-hanga (creative print) artists. Kitaoka popularized the method of wood engraving with his brightly colored abstract and realistic designs.

Fumio Kitaoka was born in Tokyo, Japan in 1918. He studied oil painting and printmaking under artist Un’ichi Hiratsuka (1895-1997) at the Tokyo School of Fine Arts (Tokyo Bijutsu Gakko). In school, Kitaoka learned various traditional Japanese printmaking and Western painting techniques. In 1945, the young artist accepted his first role as a teacher in Manchuria, China. The inspiration for his 17 print series Journey to the Native Country (1947) stemmed from his time in China. The social realist collection of prints is Kitaoka’s most well known series, which depicts the collapse of the Japanese colonial rule.

In the early 1950s, Kitaoka attended classes taught by sōsaku-hanga artist Kōshirō Onchi (1891-1955) and joined Onchi’s First Thursday Society. From 1947 to 1948, Kitaoka contributed prints to the publication Ichimoku-shū (First Thursday Collection) with other members of the society. The young artist also completed his second series of prints titled The Face of Tokyo, which is comprised of five portfolios of prints illustrating the resurgence of post-war Japan. In 1955, Kitaoka branched out of Asia and traveled to the West. He studied engraving at the French National School of Fine Arts (École Nationale des Beaux Arts Française) in Paris, France. During his time in Paris, Kitaoka studied the work of modern and Impressionist artists like Vincent Van Gogh, Henri Matisse, Paul Cézanne, and Pablo Picasso.

After his studies in Europe, Kitaoka returned to Japan and established himself as a contemporary master of woodblock printing. In the mid-1960s, Kitaoka moved to the United States and taught art at the Minneapolis Museum School of Art and the Pratt Graphic Arts Center in New York. During his artistic career, Kitaoka exhibited at numerous international art biennales in Asia, America, and Europe. Later in his career, he served as Director of the Japanese Artists Association and was given the title as an honorary member of the Japan Print Association (Nihon Hanga Kyōkai).

Kitaoka focused on depicting realistic scenes of landscape and nature with his woodblock prints. The artist incorporated abstract qualities and bright colors in his designs, as well as artistic cues and influence from Onchi’s work. When asked in an interview what he wished to express through his work, Kitaoka responded, “Decayed rafts, fishing villages, rocky seasides. Whatever subjects I choose, I want to express through them the profundity of nature and the feeling of eternity. This attitude may appear too seclusive or ignorant of our actual community, yet I believe in the end that it relates to a love of mankind... I stand in awe of nature and often feel an impulse to plunge into it.” Kitaoka used the wood engraving technique the most when producing prints. Wood engraving consists of cutting into the surface grain of wood so that the white space and line is shown on a dark background. In comparison to woodblock methods, wood engraving takes away the positive space of the image as opposed to the negative space. Negative space encompasses the background portion of an image whereas positive space becomes the focus of the image. The result of a wood engraved design on a surface produces a bold and chiseled effect on paper that reveals a strong, high contrast depth of value. Kitaoka’s prints also stand out because of his consistent application of thick pigments on the paper’s surface.

Fumio Kitaoka passed away on April 23, 2007 at age 89 of pneumonia. His work can be found in numerous collections and major museums worldwide including the Museum of Modern Art (MoMA) in New York, Museum of Fine Arts in Boston, Fine Arts Museum in San Francisco, Cleveland Museum of Art, Harvard University Art Museums, Art Institute of Chicago, National Museum of Warsaw, Yokohama Art Museum, and the Japanese Museum of Israel.