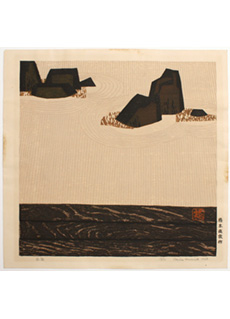 Untitled (Barren Landscape) by Hashimoto Okiie (Japan, 1899-1993). A sosaku hanga Japanese woodblock print depicting a barrend landscape. The print has a very unique perspective to it with multiple depths of perspective presented as one flat image. A beautiful and engaging work. Limited edition numbered 4 of 70. Pencil signed by the artist. Dated 1966. 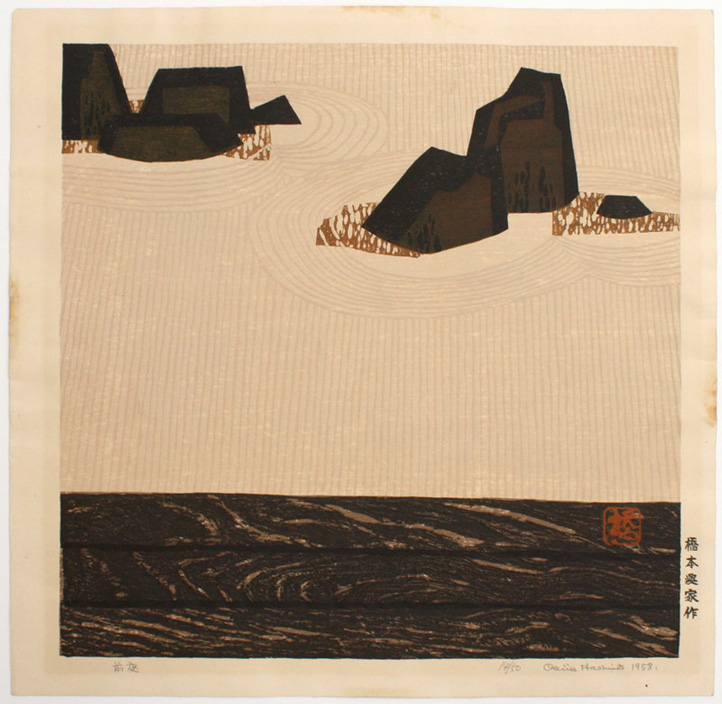 Zen Rock Garden by Hashimoto Okiie. Japanese limited-edition sosaku hanga woodblock print by Okiie Hashimoto (1899-1993) titled in kanji on the bottom margin "Front Garden." The print is pencil-signed, dated 1958, and numbered 16/50 in the bottom margin. The artist's red seal is at the lower right corner of the image. The lower right margin holds a black 5-character self-published mark.

Size: 17 3/8" w x 17 7/8"h
Condition: Very good. The print is slightly sunstruck and browned overall. There are tape stains and tape remnants to the margins verso. It bleeds through slightly to the front edges. The paper is somewhat thinned at the bottom edge verso.

Hashimoto Okiie was born on October 4, 1899 in the Tottori Prefecture of Japan in the region of the southern end of the Japanese main island Honshu. The island is rich in ancient Japanese culture including centuries-old temples, palaces, and gardens, which are reoccurring images found in Okiie’s later work. Okiie attended the College of Art in Tokyo and studied painting under artists Itaru Tanabe (1886-1968) and Shodo Hirata (1882-1971). In 1923, Okiie graduated from school and began freelancing and teaching art. Okiie took a course in woodblock printing at the Nihon Bijutsu Gakkô (the Nihon School of Fine Arts) with renowned woodcut artist Unichi Hiratsuka (1895-1997). Okiie formed a solid friendship with Hiratsuka and joined the iconic group of artists who practiced the sōsaku-hanga (creative print) style of printmaking, known as the Yoyogi-ha. The sōsaku-hanga movement approached producing art like modern Western artists, which emphasized creative, artistic autonomy and integrity. Sōsaku-hanga artists were involved in the printing process from inception of the idea to cutting and printing the image. This movement eliminated the jurisdiction of publishing houses over the production and final print for commercial consumption. Sōsaku-hanga artists created artwork as a means of intrinsic expression. The young artist also participated in Hiratsuka and other print artist’s collections of war-era depictions in the series Kitsutsuki hangashu as well as the collection of prints by 10 selected artists called Ichimokushu (First Thursday), 1943.

Okiie focused on printmaking, specifically woodcutting, as his primary art medium. Okiie, like Hiratsuka, became known for his studies and depictions of historical Japanese edifices and beautiful landscapes. His series Nihon no shiro gabun shu (Picture Collection of Japanese Castles), 1944, Kojo jikkei (Ten Views of Ancient Castles), 1946, and Nihon no meijo gashu (Picture Collection of Famous Castles of Japan), 1962, reveals depictions of ancient Japanese castles and gardens. Okiie began incorporating figures and creating portraits, especially of women, later in his artistic career. Although the artist’s repertoire was primarily of traditional ukiyo-e subjects, his style and mark was and still is unequivocally distinct. Okiie used vibrant colors and rendered his images with an interesting use and overlap of lines and shapes to create texture. He experimented with the woodblock printing process, which is apparent in his more abstract prints that show solid blocks of colored shapes and loose, dark line work to define the image. Okiie’s playful manipulation of perspective and the picture plane draws viewers in to his whimsical representations. Due to his experimentation of styles and techniques, Okiie’s print series and images vary to some degree, but consistently suggest his individualized artistic mark. Okiie signed his prints with the traditional Japanese stamp and wrote his name “Oki” and “Hashi” as his signature. He would also inscribe on some of his prints, Hashimoto Okiie saku ("Work of Hashimoto Okiie").

In 1995, after more than 30 years of teaching, Okiie retired and devoted the rest of his life to printmaking. The artist passed away on August 18, 1993 at age 94 in Tokyo. Okiie’s work can be found in numerous collections and major museums worldwide including the Art Institute of Chicago, Dallas Museum of Art, Fine Arts Museum of San Francisco, National Gallery of Art in Washington, D.C., Cleveland Museum of Art, Harvard University Art Museums, and the British Museum, among others.