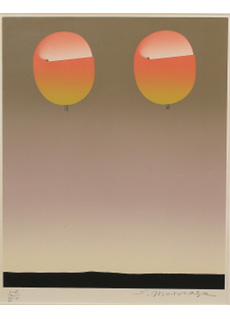 Sadamasa Motonaga 元永 定正 (1922–2011) was an avant-garde artist and member of the internationally celebrated Gutai Art Association (1954–72). Motonaga is widely recognized for expanding definitions of painting to encompass a wide range of experimentation with materials, performance and interactive environments, which bridge the visual culture of the immediate postwar era and contemporary painting.

Sadamasa Motonaga 元永 定正 (1922–2011) was an avant-garde artist and member of the internationally celebrated Gutai Art Association (1954–72). Motonaga is widely recognized for expanding definitions of painting to encompass a wide range of experimentation with materials, performance and interactive environments, which bridge the visual culture of the immediate postwar era and contemporary painting.

Born in 1922 in Iga, Mie Prefecture, Japan, Motonaga attended a trade school and held a series of odd jobs in Osaka and his hometown while aspiring to become a manga artist. From 1946 to 1952, he trained under the Japanese Art Academy painter Mankichi Hamabe(1902–1998), who specialized in nudes and landscapes on canvas. The artist moved to Kobe in 1952, where he began experimenting with abstract painting and object making. His painting Yellow Nude (1953) received the Holbein Prize at the Ashiya City Art Exhibition, and attracted the attention of artist Jirō Yoshihara 吉原 治良 (1905–1972), who invited him to join the Gutai Art Association. He continued to exhibit with the group from 1955 until 1971.

Early in his career, Motonaga’s practice was characterized by his juxtapositions of manufactured and organic materials for Gutai’s seminal exhibitions staged in Ashiya Park, the Experimental Outdoor Exhibition of Modern Art to Challenge the Midsummer Sun (1955) and Outdoor Gutai Art Exhibition (1956). Motonaga’s most famous piece, Work (Water) (1956) was a site-specific installation consisting of vinyl tubes suspended among trees and cradling pools of vibrant, colored water. New iterations of the work have been staged most recently at the 2009 Venice Biennale, the atrium of the Solomon R. Guggenheim Museum for the exhibition Gutai: Splendid Playground (2013) and Fergus McCaffrey Gallery, New York during the exhibition Gutai: 1953–59 (2018). In the mid-1950s, he began developing hard-edged biomorphic motifs that evoked manga cartoon-like forms and would later characterize his painting practice to blur forms of high and low art. By 1957, Motonaga’s work became increasingly abstract. He began employing chance-operations to his painting approaches resulting in brightly colored, fluid lines, drips and pools of pigment onto the canvas.

With the support of a Japan Society Fellowship, Motonaga lived in New York City from 1966 to 1967. Intrigued by the vogue of Pop Art in New York City, he started experimenting with airbrush and acrylic paint to develop a whimsical signature style rooted in his anthropomorphic motifs of the early 1950s. These definitively Motonaga compositions featured bright, highly saturated shapes: orbs, knots and globs, delicately modeled with airbrush against a muted, often bifurcated, background. The contrast between the subtle gradient and hard-edge between the negative space surrounding the shapes are sometimes read as landscapes. Throughout the 1970s, Motonaga extended his practice to printmaking, illustration, film, pottery and furniture design. He also developed lesser known graffiti-style line drawings adorned with canned spray paint.

Throughout his career, Motonaga was also highly invested in accessibility, teaching and writing about art for children, which aligned with Gutai’s emphasis on play as well as the pursuit of individualism and uninhibited originality. Gutai’s creative pedagogy that emphasized making art accessible and empowering for children through participatory artmaking and their writing for the children’s poetry magazine Kirin. The proceeds from certain works in which Motonaga participated, such as the Gutai Card Box (1962), moreover, were donated to a children’s art charity. His work with children informed and shaped much of his own original style. Motonaga also became a well-known writer and illustrator of experimental children’s books in Japan with titles such as Clunk Clunk Clunk! (1984), Big, Small (2011) and Clank Clank! Bang Bang! (1990), as well as collaborations with the poet Juntaro Tanikawa’s 谷川 俊太郎  (b.1931) Bloop Bloop Bloop! (1977) and The Light in My Heart (2010) and jazz pianist Yosuke Yamashita 山下 洋輔 (b.1942) Boppity Bop! (1990).

Motonaga was awarded numerous awards throughout his career including the Prize for Excellence at the 6th Contemporary Art Exhibition of Japan, 1964; Grand Prix from the Shincho Foundation and the Grand Prix at the 4th International Biennale Exhibition of Prints, Seoul, 1983; Medal of Chevalier of the Order of Arts and Letters, 1988; the Japanese Government Purple Ribbon Medal of Honor for academic and artistic achievement, 1991, Osaka Art Prize, 1992; Kobe Shimbun Peace Prize, 1996; and the Culture Merit Award from the Mie Prefecture, 2002. The artist’s work has been featured in landmark exhibitions around the world, most notably at the Venice Biennale,1993 and 2009; Hyogo Prefectural Museum of Art, Kobe, 1998; Hiroshima City Museum of Contemporary Art, 2003; Nagano Prefectural Shinano Art Museum, 2005; the Museum Kunst Palast, Düsseldorf, 2006; Palazzo Fortuny, Venice, 2007; The Solomon R. Guggenheim Museum, 2013; and the Dallas Museum of Art, 2015.