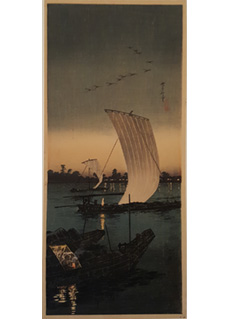 Takahashi Hiroaki Shōtei (高橋松亭, Japan, 1871-1945) was a 20th century shin-hanga printmaker and the first artist to produce work for the publishing house Watanabe Shōzaburō. He is known for the large quantity of prints he designed in his life including oban prints and prints depicting bijin-ga (beautiful women) and other figures, cats, scenes of nature, and landscapes. He used Western-style techniques like atmospheric light, which modernized and revitalized traditional 18th and 19th century ukiyo-e methods of printmaking.

Size: 5 3/8" h x 12" w
Condition: Very good overall condition with margins. There is a small amount of puckering in the sky and a very soft crease at the lower left.

Rain on Izumi Bridge (Izumibashi no Ame) by Takahashi Hiroaki (Shotei) (Japan, 1871-1945). Shin Hanga Japanese woodblock print. Published circa 1930. A beautiful depiction of people battling the heavy rain storm in their traditional Japanese attire while crossing a bridge. An iconic print and one which is highly identifiable with the period. Signed with the artist’s red seal, center left. Illustrated and discussed in Amy Reigle Stephens, gen. ed., The New Wave: Twentieth-century Japanese Prints from the Robert O. Muller Collection, 1993, page 111, plate 86.

Evening Shower at Takaido by Takahashi Hiroaki Shotei. Also known as Sudden Shower at Takaido; Passengers at a loss. A beautiful post-earthquake version of the print dating to circa 1924 - 1936. The title of the print can be found in the upper left. The artist chop mark is in the bottom right. 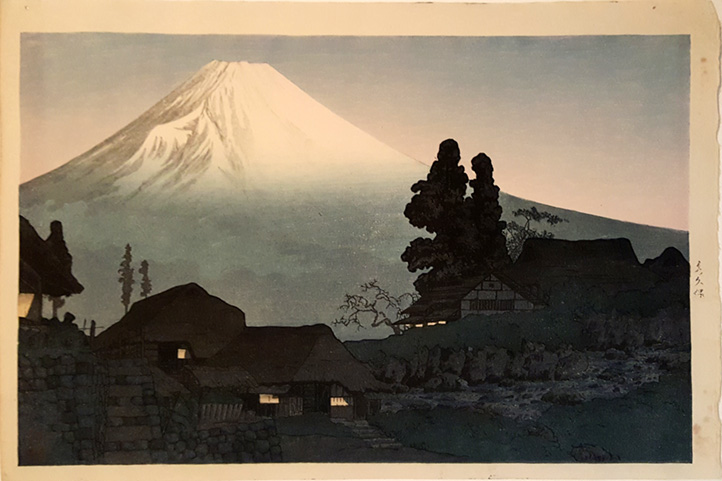 Fuji From Mizukubo by Takahashi Hiroaki Shotei. Originally published by Watanabe in 1936. This is a later edition from the original woodblocks.

Size: 9 1/4" h x 14 1/2" w
Condition: Very good. A little discoloration on the right and left margins along with 2 pin holes on the upper margin corners.  The colors appear strong.

Sekiyado by Takahashi Hiroaki Shotei. The title can be seen at the upper right, Sekiyado, followed by the artist's double-gourd seal, Hiroaki, and it was published by Watanabe. On the matte, "Sailboats on Sekiyado River" is pencil written on the lower left and "Hiroaki" is pencil signed on the lower right.

Hiroaki Takahashi AKA Takahashi Shotei is regarded as one of Japan's greatest woodblock print artists in history. His works can be found in numerous museums including Harvard Art Museums, Museum of Fine Arts Boston, Johnson Museum of Art.

Takahashi Hiroaki Shōtei (高橋松亭, Japan, 1871-1945) was a 20th century shin-hanga printmaker and the first artist to produce work for the publishing house Watanabe Shōzaburō. He is known for the large quantity of prints he designed in his life including oban prints and prints depicting bijin-ga (beautiful women) and other figures, cats, scenes of nature, and landscapes. He used Western-style techniques like atmospheric light, which modernized and revitalized traditional 18th and 19th century ukiyo-e methods of printmaking.

Takahashi Hiroaki Shōtei was born with the name “Matsumoto Katsutaro” in Mukoyanagiwara, Asakusa, Tokyo on January 2, 1871. Shōtei was adopted into the Takahashi family and took on his new name, “Takahashi Katsutaro.” At the age of 9, Shōtei studied traditional Japanese painting from his uncle, Matsumoto Fuko (1840-1923). As an apprentice, Shōtei took on part of his uncle’s name, “Shōtei” - a variant of the name “Matsumoto.” At the age of 16, Shōtei started work at the Imperial Department of Foreign Affairs where he was assigned with drawing designs of the Imperial medals and ceremonial objects.

Shōtei focused his career on creating original paintings. He produced paintings that he exhibited extensively and also worked as an illustrator part-time for various publications like newspapers, magazines, and scientific texts. In 1899, Shōtei and artist Terazaki Kogyo (1866-1919) founded the Nihon Seinen Kaiga Kyokai (Japan Youth Painting Society). In 1982, he designed his first woodblock prints for a magazine published by the publication company, Okura Shoten. Later, Shōtei created print designs for the publishing house Maeba Shoten where he met print publisher Watanabe Shōzaburō (1885-1962).

In 1907, Shōzaburō hired Shōtei to aid him with the production of his print designs. Up until 1923, Shōtei produced as many as 500 print designs for Watanabe. He signed each print with his “Shōtei” seal until 1923. Shōtei signed prints later with the names “Komei,” “Hiroaki,” “Rakutei,” and “Kakei.” Unfortunately, in 1923, a fire caused from the Great Kanto earthquake destroyed Watanabe’s publishing house. Shōtei aided with the reproductions of the lost prints and produced another 250 print designs published by Watanabe. While working at Watanabe, Shōtei also designed prints for the publishing house, Fusui Gabo. Fusui allowed the artist more creative freedom than Watanabe. Additionally, Shōtei acted as an editor for the production of the ukiyo-e prints, a promotional role he had not worked before. He designed many bijin-ga (depictions of beauty) for Fusui as well as several renditions of Mount Fuji and cats, all of which became highly popular and collectible over time. Later in the 1930s, Shōtei created over 200 designs for the publisher Shōbidō Tanaka.

Shōtei was a shin-hanga (new print) artist. Artists like Shōtei made prints using the same traditional system used to produce ukiyo-e prints. They were versed in 18th and 19th century Japanese modes of woodblock printing using the traditional hanshita method of printing. Hanshita involves the artist designing the keyblock and working with the carvers to design and create the woodblocks. This method allowed a closer collaboration with the designers and carvers as opposed to the Meiji era method where carvers created the woodblocks by looking at the artist’s finished painting without the artist present. Shin-hanga prints depict similar subject matter to ukiyo-e prints like landscapes (fukei-ga), nature like birds, flowers, and plants (kachō-e), beautiful women (bijin-ga), and kabuki theatre (yakusha-e) actors. Shin-hanga prints display painterly Western-style techniques of rendering subject matter, specifically the use of atmospheric light. Shin-hanga prints showcase less black outlines like the ones apparent in ukiyo-e prints, and instead exhibit atmospheric depth and light made by layering color. The use of a different paper and pigments also distinguishes shin-hanga prints from ukiyo-e.

Takahashi Hiroaki Shōtei died on February 11, 1945 of pneumonia. It was falsely believed for a while that the artist was killed by the 1945 atomic bomb in Hiroshima. During his life, Shōtei was constantly in the shadow of print master and fellow shin-hanga artist Hasui Kawase (1883-1957). However, Shōtei’s prints display stunning and flawless depictions of landscapes, cityscapes, and scenes including figures, animals, nature, and the seasons of the year. Shōtei was the first artist to work with Watanabe Shōzaburō and designed a vast quantity of prints in his lifetime. His work is included in Lawrence Smith’s The Japanese Print Since 1900, published by Harper & Row Publishers Inc. in 1983, and Modern Japanese Prints 1912-1989, published by Cross River Press in 1994. Shōtei’s work can be found in numerous collections and major museums worldwide including the Museum of Fine Arts in Boston, Los Angeles County Museum of Art (LACMA), National Gallery of Art in Washington, D.C., Rijksmuseum in Amsterdam, British Museum, and the Queensland Art Gallery & Gallery of Modern Art in Australia.