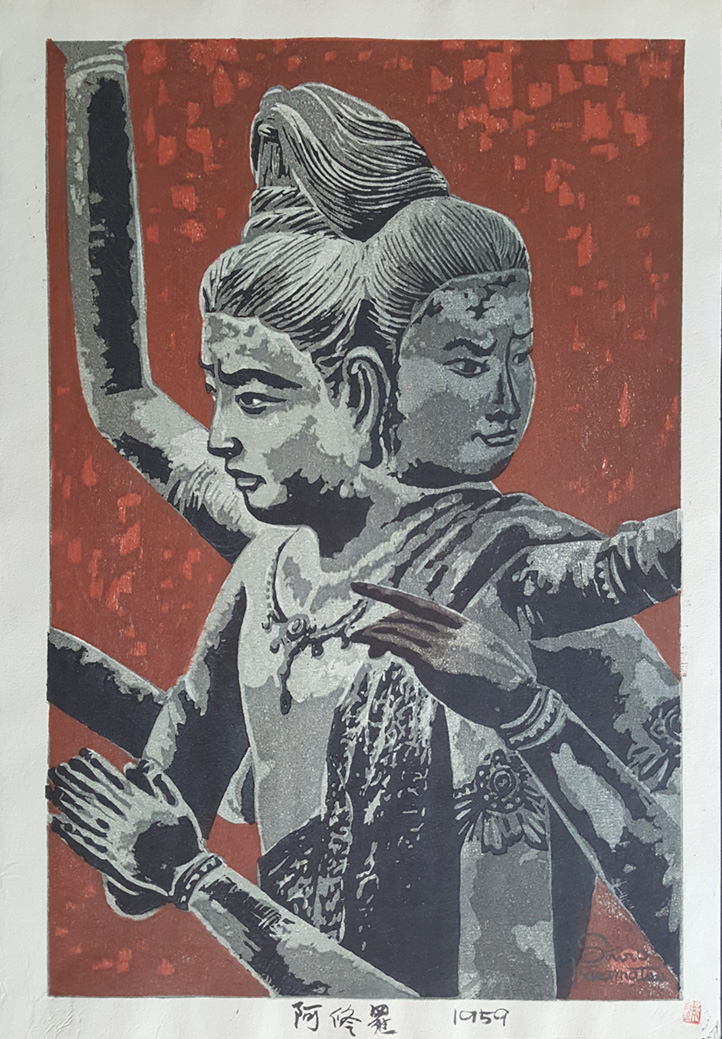 Shirō Kasamatsu (Japan, 1898-1991) is a Shin Hanga and sosaku-hanga artist known for his depictions of traditional Japanese architecture and scenes of nature, oftentimes depicting the four seasons. 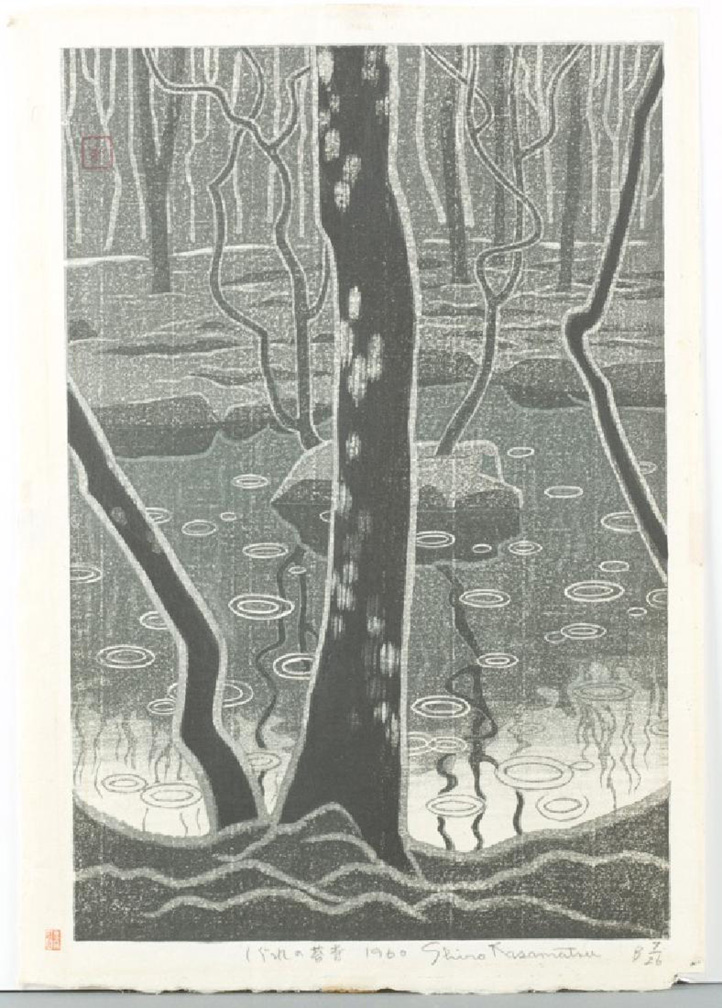 Saihoji in the Rain-Shigure by Shiro Kasamatsu. Pencil signed and dated by the artist. Artist and publisher chop marks in the bottom left. Dates to 1960. Small limited edition print numbered 7 of 26. 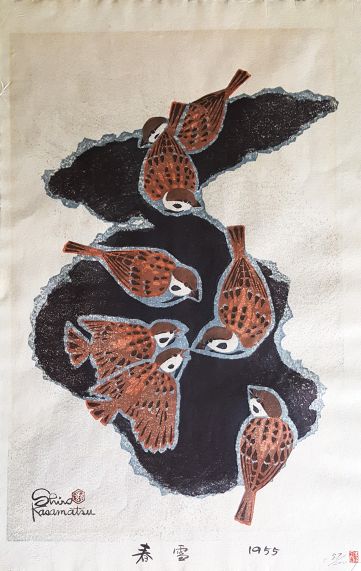 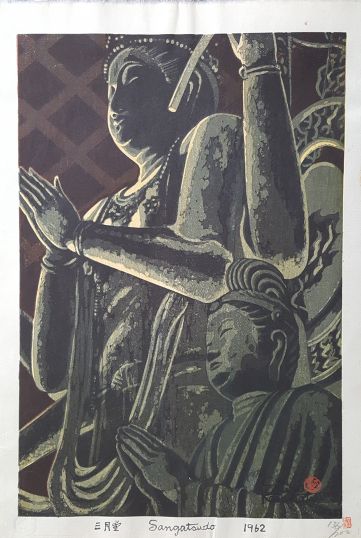 Sangatsudo Temple by Shiro Kasamatsu. Japanese woodblock print depicting the Birushana Buddha inside the temple. Print dates to 1962. Hand signed and stamped by the artist. Limited edition numbered 136 of 200. 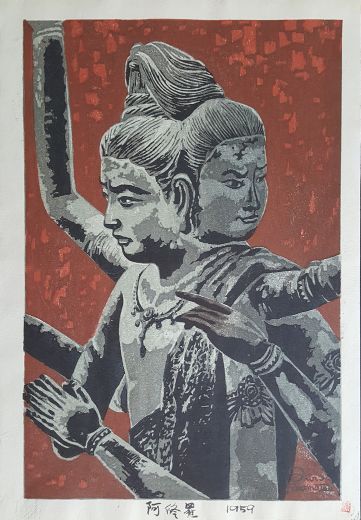 Shirō Kasamatsu (笠松紫浪, 1898-1991) is a Shin Hanga and sosaku-hanga artist known for his depictions of traditional Japanese architecture and scenes of nature, oftentimes depicting the four seasons.
Shirō Kasamatsu was born in Asakusa, Tokyo, Japan on January 11, 1898. At age 13, he attended the Kiyokata Kaburagi painting school, a traditional Japanese art school and learned from the artist Kaburagi (1878-1972) firsthand. Showing artistic promise, Shirō began exhibiting his artwork in Tokyo as a young adult.
Shirō's paintings were shown at several prestigious exhibitions including the Kokumin Bijutsu Kyokai (The People's Art Society) and the government sponsored Bunten, Sengakai (The Select Art Society) where they caught the eye of Watanabe Shozaburo, a Tokyo publisher. In 1919, the prestigious publisher contracted Shirō to begin producing designs. By the late 1940s, Shirō had created more than 50 print designs for Watanabe. In 1936, he was one of the artists included in the seminal print exhibition of Shin Hanga (New Movement) prints at the Toledo Museum of Art in Toledo, Ohio. Shirō was also active in the Tatsumi Gakai (Southeast Painting Society), Seikinkai (Blue Collar Society), and Kyodokai (Homeland Society).
In the early 1950s, Shirō shifted his partnership with Watanabe to the publisher Unsodo in Kyoto. Over the next decade, Shirō created 102 known designs for Unsodo. These prints were in the shin hanga style and showed traditional subjects like bijin-ga (women adorning traditional Japanese dress), Japanese interiors, Noh masks, and landscapes of Kyoto using soft colors. Shinobazu Pond, published in 1932, was so popular that it was continually reprinted throughout the 1930s and 1940s. Shirō was a master of depicting nighttime, rain, and snow in his prints. From 1955 to 1965, Shirō began practicing sosaku-hanga, acting as his own publisher and supervising every aspect of the printing process and final print, without the jurisdiction of the contracted publishing houses. Shirō produced 120 prints, sosaku-hanga, with a more modern and westernized approach. Many of the 120 prints rendered landscapes and macho-e - depictions of birds and flowers. In contrast, the grid-like designs of Windows of Tearoom help to convey a sense of tranquility. Shirō is known for his rendering depth in his work by integrating a foreground, middle ground, and background. Most of Shirō’s prints also contain overlapping block or solid color subjects to create depth. Shirō continued to create prints for several decades but never showed or promoted them through exhibitions or gallery affiliations.
In 2005, author Dr. Andreas Grund produced a catalog raisonné of Shirō’s work, Shirō Kasamatsu - The Complete Woodblock Prints. It is a comprehensive guide for collectors with over 300 prints created by Shirō Kasamatsu during his lifetime and contains sections on seals, dating, and publisher's information. Shirō signed these prints himself in English. Some of his Watanabe-published prints also bear English signatures but were applied by Watanabe's employees, not by the artist himself. Some of the self published prints carry a watermark in their lower left corner. The watermark reads "Shi", a part of Shirō's name (which also has the meaning "murazaki" or purple). The upward carving strokes and angular lines of Five Story Pagoda at Dusk make it one of Shirō's most dynamic prints. An exhibition in 1996 titled Hundred Views of Japan by Kasamatsu Shirō (Mokuhan Nihon Hyakkei) was held at the Yamanashi Prefectural Museum. In total, Shirō produced about 290 prints during his life.
Shirō Kasamatsu died on June 14, 1991 at age 93. His work can be found in numerous international collections and major museums including the British Museum, Museum of New Zealand, Yamanashi Prefectural Museum, Brooklyn Museum, Art Institute of Chicago, Los Angeles County Museum of Art, Auckland Museum of Art, Tokyo Museum, and the Museum of Fine Arts Boston, among others.