Frosty Morning 2 by Hideo Hagiwara (Japan, 1913-2007). A subtle but powerful abstract print by Sosaku Hanga master Hideo Hagiwara. Depicts a winter scene showing the evolving nature of the morning snow as it overlays the natural landscape and is exposed to other elements. A beautiful modern print. Limited edition numbered 19 of 50. Signed in pencil by the artist. Dated 1965.

Quiet Night by Hideo Hagiwara (Japan, 1913-2007). A vibrant abstract etching by the Sosaku Hanga master Hideo Hagiwara. The print has tremendous depth and gives the interpretation of looking through a telescope at an animated night sky. Printed in 1979. Limited edition numbered 7 of 20. Signed in pencil by the artist. 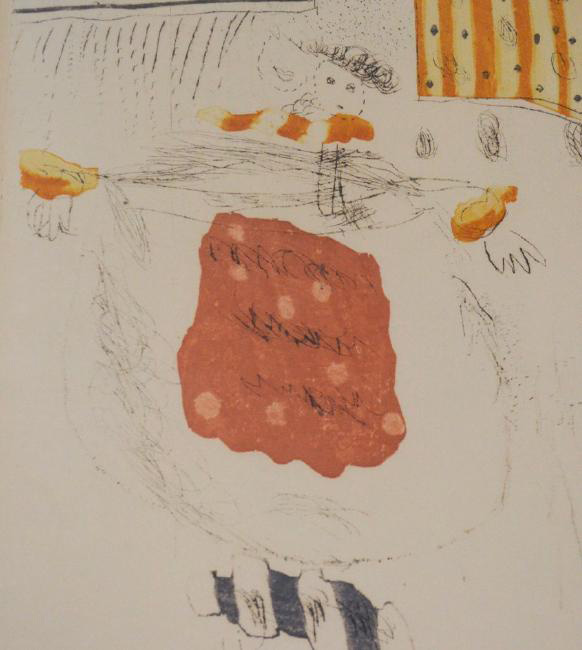 Lady A by Hideo Hagiwara 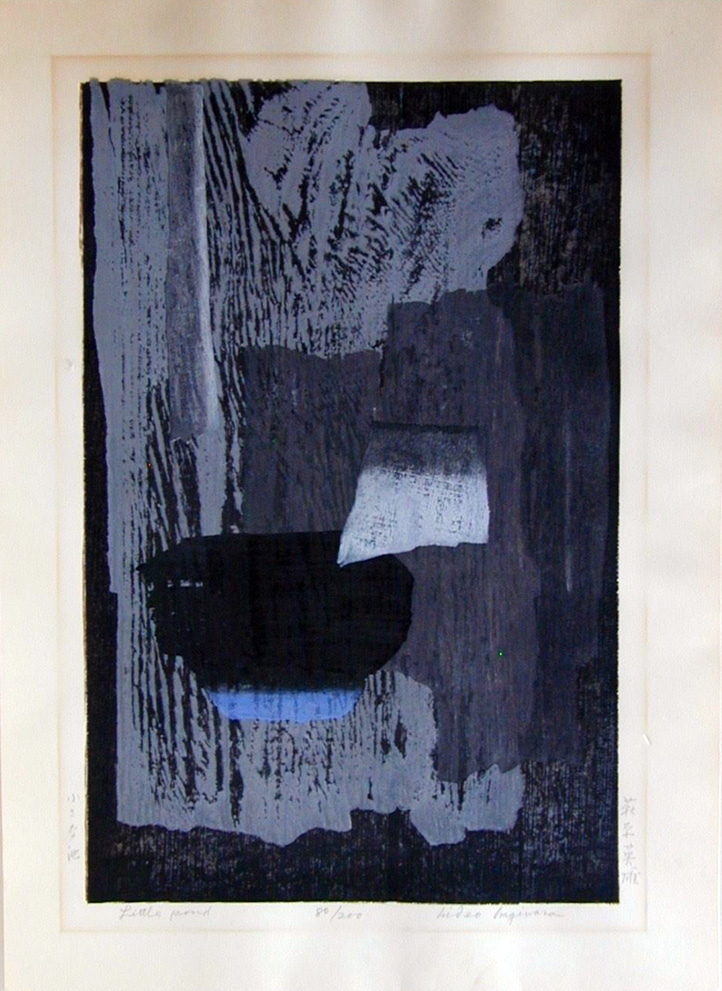 Little Pond by Hagiwara Hideo. Limited edition Japanese woodblock print numbered 80 our to 200. Pencil signed and titled by the artist. Print dates to 1962. A sophisticated, subdued, and tasteful abstract print by a leader in the Sosaku Hanga movement.

Hagiwara Hideo was born in 1913 in the city of Kofu in the Yamanishi prefecture of Japan. Hideo spent his early childhood living in Manchuria and Korea. He moved back in his early adulthood to Japan with his family and attended Tokyo Bijutsu Gakko (Tokyo University of Fine Arts) where he studied oil painting under painter Mimino Usaburo (1891-1974). Hideo also took up woodblock printing at the university and studied under artist Hiratsuka Un’ichi (1895-1997). Hideo graduated from the university in 1938. He joined the Takamizawa Mokuhan Kanpanī (Takamizawa Woodcut Company), which specialized in copying ukiyo-e prints. Hideo did not design any prints but was given the role of executing accurate copies of original artwork to be corrected and given to the press team to be printed. In 1943, though, Hideo had to give up his work when he was conscripted into the army. In 1945, he returned home to find his house and studio completely destroyed from the U.S. Air raids. Much of his early work had disintegrated from the bombs. Initially, Hideo spent the first 20 years of his career painting but switched to woodblock printing when he was recuperating from tuberculosis that he contracted during the war.

Hideo’s early work was figurative but later evolved into an abstract style, for which he became internationally recognized. Hideo worked fast comparatively to other woodblock printers and liked to print large-scale. This was because Hideo also carved images directly onto the block or plate without making any preliminary sketches. Hideo worked in sets of series with each series based on a theme: Soil, Stone Flower, Fantasy, Man In Armor, Greek Mythology, Fairyland, Circus, Shadow, Face, and Ancient Record series. Additionally, Hideo is known as a Japanese contemporary printmaker for his early advances in unconventional printing techniques like reattaching block shavings to the block surface to create an unusual and visually interesting texture and depth on the print. Hideo also developed reverse printing, where both sides of the paper are printed. By printing on the verso, or backside of the page, Hideo created a soft patina of color that soaked through the paper to the other side. From there, Hideo would print the image atop the front of the page.

In 1958, Hideo showed his first print exhibition at Tokyo’s Yoseido Gallery, which launched his career as a successful and popular printmaker. Hideo participated in the 2nd International Biennial Exhibition of Prints in Tokyo in 1960, which won him the Kanagawa Prefectural Museum of Modern Art’s Award. He furthered his international reputation by winning the Grand Prix of the 7th Lugano International Print Biennial in Lugano, Switzerland in 1962 and the 2nd International Print Biennial in Bánska, Czechoslovakia in 1967. He also showed at the Ljubljana and Kraków print biennales and earned top honors. In 1967, Hideo began teaching at Oregon State University and in 1977, began lecturing at Geidai (Tokyo University of Fine Arts and Music). Hideo’s artwork was included in the British Museum’s exhibition titled “100 Views of Mount Fuji” (May 11 – July 29, 2001). Hideo was selected by the museum, an honor given to a select few, to exhibit and represent contemporary Japanese art. The work submitted to the show featured Mount Fuji during different times of the day and seasons, which Hideo observed and drew directly in person because he lived close to the mountain. In 1979, Hideo served as Chairman of the Nihon Hanga Kyōkai (Japanese Print Association). Additionally, in 1983, he was awarded the Purple Ribbon by the Japanese government for his life’s work and devotion to the arts. In 1989, was awarded a Gold Medal by the Nobel Prize Committee for five works he produced based on themes from the novels of Kawabata Yasunari (1899-1972).