Kawase Hasui (川瀬巴水, Japan, 1883-1957) was one of the most prominent printmakers of the shin-hanga (“new prints”) movement of the early 20th century. He is known internationally for his serene and poetic landscape prints that eloquently and masterfully depict dawn, dusk, snow, rain, nighttime, and moonlight.

Provenance: From a private collection. For the past 30 years the prints were properly stored away; never being framed or displayed. The majority of the collection showcases rarely seen MINT colors; several far exceeding numerous examples seen in prior collections. 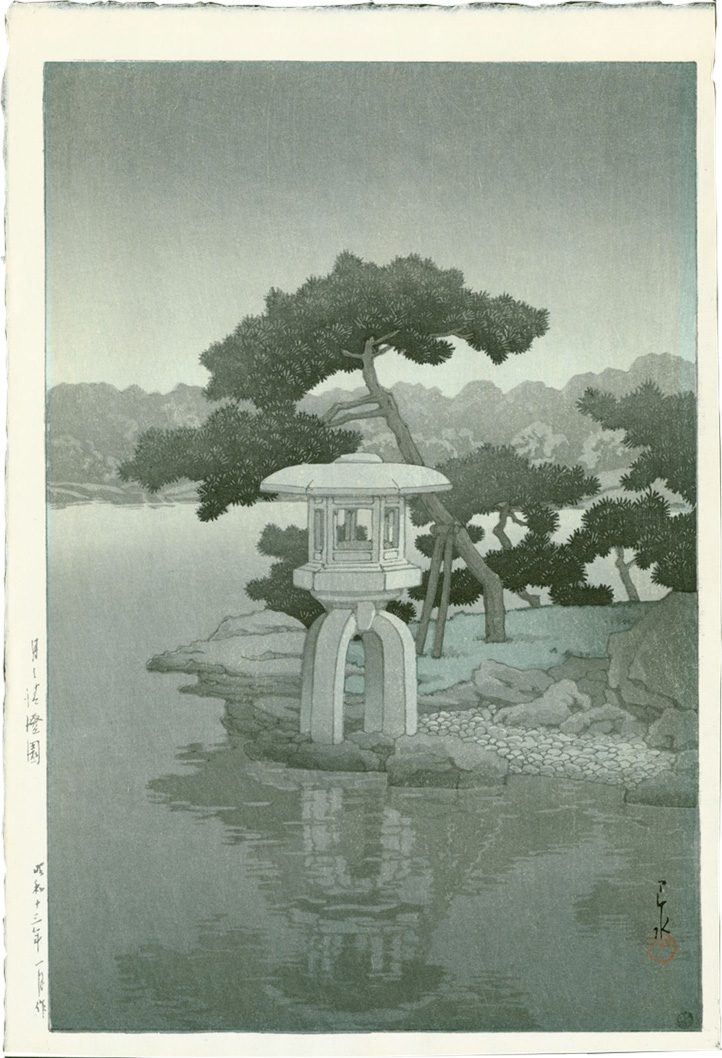 Moonlight at Kiyosumi Garden by Kawase Hasui. Originally printed in 1938, this is a later lifetime edition printed between 1946 and 1957. Published by Watanabe Shozaburo. Bears the Watanabe 6 mm round black seal in the lower right corner.

Kawase Hasui (川瀬巴水, Japan, 1883-1957) was one of the most prominent printmakers of the shin-hanga (“new prints”) movement of the early 20th century. He is known internationally for his serene and poetic landscape prints that eloquently and masterfully depict dawn, dusk, snow, rain, nighttime, and moonlight.

Kawase Hasui was born May 18, 1883 with the name “Bunjiro” Kawase in Rogetu-cho in Shiba Ward (now Shimbashi), Tokyo, Japan. Hasui’s parents were silk merchants and discouraged him from pursuing a career in art to work for the family business, but the young artist was resilient. The family also lost the business around the time Hasui was a young adult. Hasui learned how to draw and paint as a child under artists Aoyagi Bokusen and Araki Kanyu. Around this time, Hasui also suffered from a multitude of illnesses including poor eyesight. Hasui moved to Shiobara, a town north of Tokyo, to live with his aunt and recuperate in the countryside littered with natural hot springs. In Shiobara, Hasui indulged in the scenic views and sketched the abundant landscape. Later in his early adulthood, Hasui studied traditional Japanese painting with artist Okada Saburōsuke (1869-1939) and Western-style painting at with the art group Hakubakai (White Horse Society) - established by artist Seiki Kuroda (1866-1924). At age 19, Hasui exhibited his paintings in the Tatsumi Exhibition of Painting and received recognition for his artwork. Hasui applied to be a student of traditional Japanese painter Kiyokata Kaburagi’s (1878-1972) school of painting at age 26, but was rejected. Two years later, Hasui was finally accepted into Kiyokata’s school. Kiyokata gave Hasui his new name, “Hasui” meaning “water gushing from a spring” to align with Hasui’s last name “Kawase” meaning “river rapids.” In 1919, Hasui focused his artistic career on woodblock printing around the same time he saw Itō Shinsui’s (1898-1972) series Eight Views of Lake Biwa. However, Nihonga painter Imamura Shiko (1880-1916) is said to have had the greatest influence over Hasui. Also during his formative artistic years, Hasui maintained his tie to the kabuki theater. Hasui’s uncle was the well-known kabuki theater comic writer Kanagaki Robun (1829-1884) and Hasui made the best of his connections, drawing portraits for the magazine Engei shashincho in the 1920s and designing stage sets later in his life. Hasui earned his living initially through designing sashi-e (book illustrations), magazine illustrations, posters, and patterns for sashes before his work really took off.

In 1918, the Watanabe Shōzaburō publishing house contracted Hasui to begin producing print designs, a partnership between the publishing house and Hasui that would continue through the 1950s. Hasui published works based on his hometown of Shiobara like the series Shiobara Okanemichi (The Okane Path at Shiobara), Sojoji no Yuki (Snow at Sojoji Temple), Tokyo Junikagetsu (Twelve Months of Tokyo), Azabu Ninohashi no Gogo (Afternoon at Ninohashi in Azabu), Shiba Zojoji (Shiba Zojoji Temple), Shin Tokyo Hyakkei (One Hundred Views of New Tokyo), and Shiba Daimon no Yuki (Snow at Shiba Daimon). At the time, Watanabe was the leading force and producer of shin-hanga prints. Hasui’s published work through Watanabe was immensely popular and profitable, especially prints exported to the United States. In 1930, Hasui exhibited 92 prints at the Toledo Museum Art annual exhibition in Toledo, Ohio. The American and art connoisseur Robert O. Muller also pushed for Hasui’s work to be recognized and collected in America.

On September 1, 1923, an earthquake erupted in Tokyo and Yokohama and destroyed most of the work at the Watanabe publishing house and all of Hasui’s woodblocks and over 200 sketches. All of Hasui’s work that predated the earthquake is scarce and in high demand. Hasui also lost his house and other personal work as a result of the earthquake. This would be the first time Hasui would lose his house, the second time occurring from the air raids over Tokyo during the Second World War. Hasui continued to create and reproduce his renowned landscape prints despite the tragedies. The artist had created more than 400 woodblock designs for Watanabe until his death – an impressive number considering the decrease in demand for ukiyo-e prints and competition with the commercial sales of photographs. Hasui published most of his prints through the Watanabe publishing house but also through the Isetatsu, Bijutsusha, Doi Teiichi, Kawaguchi and Sakai, and Tokyo Shobido publishing houses. Hasui signed his prints with his last name - “Hasui” as well as a variety of red seals reading “sui.”

Hasui traveled extensively through his home country of Japan including regions of Hokuriku, San-in, and Sanyo. He created small sketches and watercolors that were used as reference for large, finalized prints. Most of Hasui’s prints focused on landscape and nature themes. Hasui was a master of light and depth to depict scenes of snow, rain, nighttime, and moonlight. Hardly any of his prints showed figures, with the exception of a single person in the background. However, Hasui’s execution of natural and landscape scenes were enough to capture poetic and emotional response without the inclusion of figures. Some art historians and collectors speculate the prints that include a lone figure contain a deeper meaning - either an expression of the artist’s own loneliness, his inability to have any children with his wife Mume, or for the purpose of depicting the grandeur of nature over man. Hasui’s drawings, paintings, and prints display traditional Japanese techniques and virtues. His work also evokes calmness, poise, and serenity with its flawless, simple, and balanced compositions.

Hasui Kawase died of cancer on November 7, 1957 at the age of 74 in Tokyo, Japan. By the end of his life, Hasui Kawase had created more than 600 editions of prints. During his life, Hasui also produced oil paintings, traditional hanging scrolls and a few byōbu (folding screens) during his lifetime. In 1956, the Japanese government’s Committee for the Preservation of Intangible Cultural Heritage included Hasui’s print, Zojo Temple in Snow, as an Intangible Cultural Treasure – the greatest honor for artists in postwar Japan. Additionally, in 1957, shortly before his death, Hasui was the first honoree to be revered by the Japanese government as a Living National Treasure – the highest and oldest artistic honor one can receive in Japan. Hasui is considered to be one of the last practicing artists of traditional Japanese landscape art. No artist has succeeded Hasui’s legacy. In fact, Hasui is regarded as one of the best landscape printmakers since Utagawa Hiroshige (1797-1858).

After his death, Watanabe distributed Hasui’s final print to friends and families at a memorial service – a print the artist had been working on while near his death on a hospital bed. In 1982, a retrospective exhibition of Hasui’s 180 of approximately 620 prints were shown in Tokyo. The catalogue for the retrospective was entitled Kawase Hasui: The End of the Line for Ukiyo-e. In 2004 and 2005, the Carnegie Museum of Art in Pittsburgh, Pennsylvania held a retrospective of Hasui’s work titled Kawase Hasui: Landscapes of Modern Japan. Additionally, in 2009, the Minneapolis Institute of the Arts paid tribute to Hasui with the exhibit, Woodblock Prints by Kawase Hasui. Two books Kawase Hasui and His Contemporaries: The Shin Hanga (New Print) Movement in Landscape Art, written by Irwin J. Patcher and published by Everson Museum of Art in 1986 and Visions of Japan: Kawase Hasui’s Masterpieces, written by Kendall H. Brown and published by Hotei Publishing in 2004 elaborate in-depth on Hasui’s work and legacy. The Japanese art historian and writer Muneshige Narazaki lauded Hasui’s oeuvre writing, “Although Hasui is not well known in Japan, he is famous abroad. Hokusai, Hiroshige, and Hasui are the three greatest woodblock print artists of Japan.” Narazaki also revered Hasui by referring to him as the “Artist of Snow,” suggesting Hasui’s unmatched ability to depict landscapes of snow in his prints. Hasui’s work over the years has gained attention and friction with collectors, including late-Apple CEO Steve Jobs who extensively collected Hasui’s prints. Hasui Kawase’s work can be found in numerous collections and major museums including the Fine Arts Museum of San Francisco, Cleveland Museum of Art, Harvard University Art Museums, Indianapolis Museum of Art, Los Angeles County Museum of Art, British Museum in London, and the National Museum of Modern Art in Tokyo, among others.

Artist bio and collection of images of Hasui's work.

Bio and suggested readings on Hasui by The British Museum.

The Kawase Hasui collection at the Art Institute of Chicago.