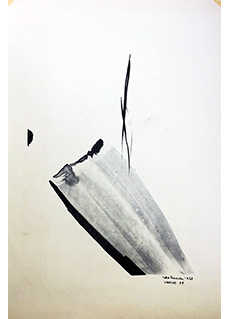 Toko Shinoda (篠田 桃紅, Japan / China, 1913-present) is a Japanese contemporary artist known for her elegant and bold sumi-e (ink paintings) and lithographic prints. She lived and exhibited in New York during the Abstract Expressionist movement and continues to work today in Tokyo.

After The Rain by Toko Shinoda

After The Rain by Toko Shinoda (Japan, 1913). Strong abstract sumi-e (Japanese ink) painting. Paper laid to board as is common for Toko Shinoda works during this period. Artist seal bottom left. Titled verso and signed by the artist in English. Work is not dated but it's estimated that this work was executed in the 1960's.

Nexus by Toko Shinoda (Japan, 1913). A beautiful abstract sumi-e (Japanese ink) painting with strong lines and an elegantly minimal design executed by a clearly disciplined hand. Paper laid on board as is common for Toko Shinoda paintings of this period. Red chop mark bottom right. "Nexus" titled to verso, signed and dated 1964 in Japanese.

Sprout No 5 by Toko Shinoda

Rippling by Toko Shinoda (Japan, 1913). Original lithograph with Sumi-e brushstrokes. Limited edition numbered 29 of 45. Published in 1998. Self published by the artist. Pencil signed, titled and numbered by the artist. The red sumi-e strokes are from the artist's Ming Dynasty ink block.

Sound by Toko Shinoda (Japan, 1913). Abstract lithograph by one of Japan's most preeminent artists. Dates to circa 1990. Limited edition numbered 29 of 30. Pencil titled, signed and numbered by the artist. 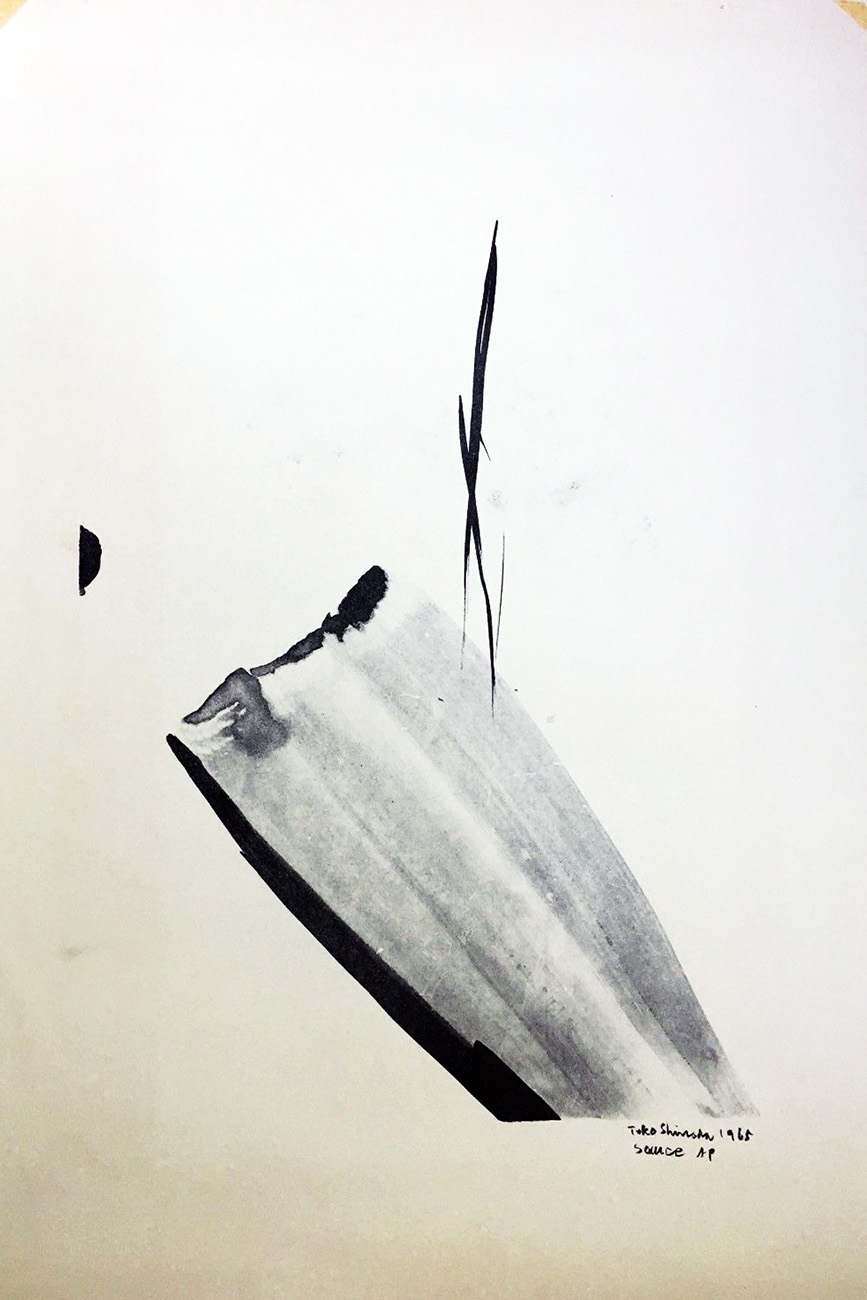 Revelation by Toko Shinoda (Japan, 1919). Abstract color lithograph on paper. Black hughes with energetic strokes of red. Titled and signed in pencil by the artist. Limited edition 25 of 35.

Sign of Spring by Toko Shinoda (Japan, 1913). Contemporary lithograph with Sumi-e Brushstrokes. Limited edition numbered 32 of 45. Published by the artist. Printed in 1983.

Crystalline by Toko Shinoda (Japan, 1913). Beautiful abstract lithograph print by one of Japan's preeminent artists. A fine, firm composition with geometric emphasis, with delicately rendered detail in red and white wash on the horizontal stroke. Signed, titled and numbered in pencil by the artist. Limited edition numbered 24 of 30.

Toko Shinoda (篠田 桃紅, Japan / China, 1913-present) is a Japanese artist known for her elegant and bold sumi-e (ink paintings) and lithographic prints. She lived and exhibited in New York during the Abstract Expressionist movement and continues to work today in Tokyo.

Born in Dalian, Manchuria, China, Toko Shinoda and her family moved back to their native country, Japan, two years after her birth. At age 6, Shinoda learned waka poetry, calligraphy, and sumi-e (sumi, meaning ink, and -e meaning paint) from her father. She continued her artistic studies throughout her early life and first exhibited her work at age 20 in Tokyo. By her 30s, she was using ink to create abstract paintings. In part with her unique style and recognition from the influential art dealer Betty Parsons, Shinoda moved to New York in 1956 and displayed her work in many solo exhibitions. She adopted there the postwar artistic movement of abstract expressionism. Shinoda took inspiration from abstract expressionists like Jackson Pollack, Barnett Newman, Helen Frankenthaler, and Robert Motherwell. Shinoda moved back to Japan in 1958, but continued to create artwork with a free and loose style like the other contemporary artists in New York.

Throughout her career, Shinoda never strayed from her chosen medium: sumi (ink). Shinoda uses ink stones made of soot (or cinnabar for red) to create the loose pigment that is bound with animal glue. Some of the ink bars Shinoda uses date back to the Ming Dynasty in China (1368-1644), when it was first created for the purpose of calligraphy. Shinoda adds water collected from rain on the rocks near her home overlooking Mount Fuji and turns the bars into a workable medium. Part measures of ink to water control the tone of black. She applies the ink on paper or hemp canvas with brushes that vary in size. Individual brushstrokes are controlled with pressure and swift movement. Shinoda, in her formative artistic career, began making lithographs to mass-produce her work. Lithography also allows her to make spontaneous drawings directly onto stone, like sumi-e. Shinoda, after every print, paints on top of the works to ensure each piece embodies her signature mark and touch. Each painting or lithographic stone requires great control because every mark on the paper can not be reversed, unlike an oil painting. Shinoda’s abstract work invites open-ended interpretation and speculation from the viewer. Shinoda explains her artistic process by stating, “Certain forms float up in my mind’s eye… I try to capture these vague, evanescent images of the instant and put them into vivid form.” Often, Shinoda’s images allude to nature and the stages and rhythms of life. She expresses this vitality with expressive repetition and clean lines. Shinoda is also known to highlight the negative space in her prints, a traditional Japanese practice known as yohaku. The negative space acts as an active part of the composition.

Shinoda sublimely merges abstract and non-objective art with traditional and mandated Eastern art practices, which makes her a pioneer and artistic revolutionary in her own right. Shinoda never joined any specific schools or styles in Japan and continues to create art in her personal studio. Shinoda has participated in the prestigious annual CWAJ Print Shows in Tokyo, Japan for over 40 years and has exhibited all over the world. She is represented by the Tolman Collection in Tokyo, the largest publishers of contemporary Japanese graphic art, and exhibits annually as a solo artist. Her commitment to her art has also extended beyond conventional painting and printmaking. Shinoda produced a large-scale mural for the Tokyo Olympic Games’ National Stadium in Yoyogi. She also designed a mural and sliding doors for the Zojoji Temple in Tokyo. Shinoda is one of the first female artists of the twentieth century to collaborate with architects and interior designers by producing designs for theater curtains, ceramic reliefs for building exteriors, and etchings for stainless steel elevator doors. Shinoda also authored several successful books and essays. The Singapore Art Museum held a retrospective of Shinoda’s oeuvre in 1996- a notable achievement. Shinoda was the first Japanese artist to receive such an honor in Singapore, a notable achievement considering past political conflicts between the two nations. In 2005, Toko Shinoda was selected among the “100 Japanese People the World Respects” by Newsweek (Japanese edition). Shinoda’s work can be found in major collections like the National Museum of Modern Art in Tokyo, Art Institute of Chicago, Hague National Museum, British Museum, Museum of Modern Art in New York, and the Guggenheim Museum. Shinoda still lives and works in Tokyo.

The Artistic Evolution of Toko Shinoda

“Without [art], I wouldn’t feel quite alive, or I wouldn’t feel like I should be living without doing some work. You could say it’s a sense of responsibility. It’s the proof that I am alive.” Toko Shinoda, 2017