Umetarō Azechi (畦地梅太郎, Japan, 1902-1999) was a sōsaku-hanga artist known for his bold and minimal prints based on the Ainu indigenous tribe of Japan and scenes depicting mountains and moutaineers.

Mountain Guide No.1 by Umetaro Azechi

Mountain Guide No.1 by Umetaro Azechi (Japan,1902-1999). Sosaku Hanga Japanese woodblock print depicting a mountaineer breaking for a (presumed) coffee and smoke. Umetaro Azechi was an avid mountaineer himself and his subjects often featured his experiences in the mountains. I envision this being a contemplative break after a long day of hiking where he's settling down for the night. A limited edition print numbered 52 of 100. Self printed by the artist in 1953. Pencil signed by the artist. 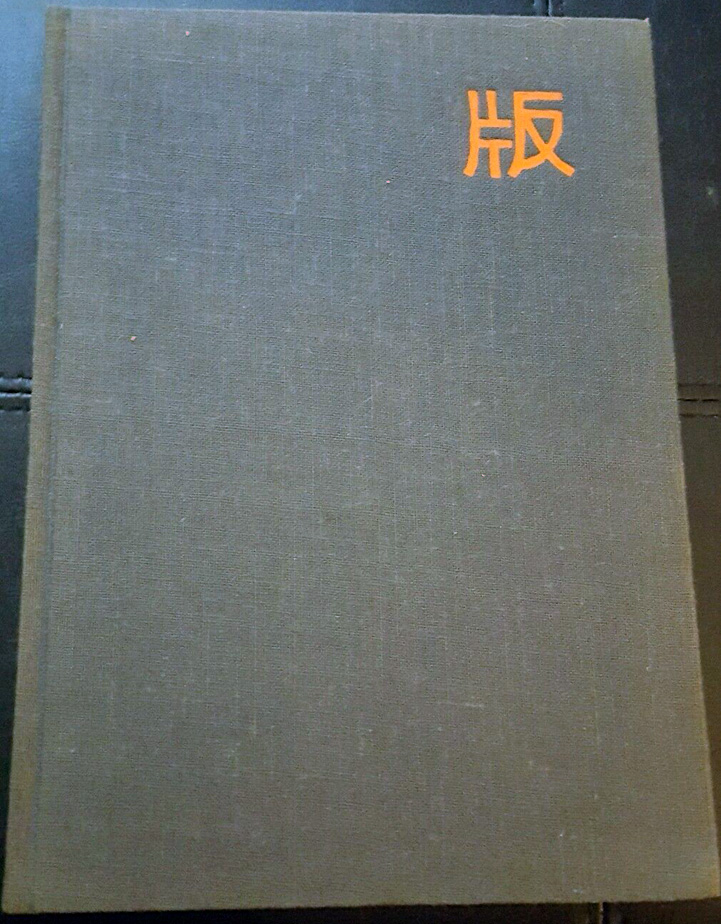 This work comes from the series Scenes of Lost Tokyo. The series was printed in 1945 during the occupation of Japan by the Allied forces. Tokyo had sustained devastating destruction due to World War II, and although the prints were intended for the occupation forces, many believe that they were also intended as a message to the Japanese people. You can imagine the mindset of the Japanese people at the time. They had witnessed much of their community and physical cultural heritage destroyed at the hands of the war. The introduction, who many believe was written by Koshiro Onchi, provides a poignant account of the emotional state of the community at the time. The following translation is provided by Lawrence Smith:

As for Tokyo, which did not escape the ravages of war, an awesome number of buildings were damaged or reduced to ashes by air raids, starting in reverence with the Imperial Palace, then those of the Meiji Enlightenment, of 300 years of the Edo period, and furthermore the structures produced by 2,600 years of history. To stand on the burnt earth is an unfathomable feeling.

Here, members of the Japanese Print Association planning together have put those scenes into woodblocks as a reminiscence of Creative Prints, and have decided to publish them as a retrospective document for those who share those regrets.  The fifteen selected views were not all of course totally destroyed, but all of them received some misfortune.  It was a lucky thing that Nijubashi, remaining so vividly in our hearts from our childhood as a revered object of worship, was not damaged.  This apart, it is deeply regrettable that these famous places were either completely destroyed or damaged.  These pictures are all the products of the efforts of artists motivated by this sadness through loss.  We in the art world rejoice that we can serve our elders with filial piety in this way.  We are happy to be able to request the sympathetic understanding of those with the same feelings.  Now, as the first artistic banner of a revived Japan with a new life, we are pleased to offer this collection to the public for sale.

The belief is that the depiction of these damaged / destroyed cultural sights in their original glory, in conjunction with the thought of breathing life into a "revived Japan", was a statement encouraging the Japanese people to carry forward these Japanese cultural icons and heritage in what no doubt would be a challenging period of revival as the city re-built after the war.

The series includes 15 prints by 9 of the leading print artists at the time. This work specifically depicts the Graveyard at Sengakuji. Sengakuji is a small temple near Shinagawa Station in Tokyo. The temple is famous for its graveyard where the 47 Ronin are buried.

The 47 Ronin are 47 leader-less samurai who avenged their master by killing lord Kira on December 14, 1702. Afterwards, they carried Kira's head to Sengakuji, and were later sentenced to commit seppuku, which is ritual suicide (a similar fate to the master who they avenged). This historical event has become part of Japanese legend and has been reproduced in various plays, books and movies. A festival is held at the temple every year to to commemorate the event.

Figure in White by Umetaro Azechi

Climbing Rope Zairu by Umetaro Azechi (Japan, 1902-1999). Woodblock print; ink and color on paper depicting a mountaineer with a climbing rope. Signed, titled, dated and numbered in pencil by the artist. Dated 1957. Limited edition numbered 8 of 100.

Climbing Rope Zairu by Umetaro Azechi (Japan, 1902-1999). Woodblock print; ink and color on paper depicting a mountaineer with a climbing rope. Signed, titled, dated and numbered in penci by the artist. Dated 1957. Limited edition numbered 99 of 100. 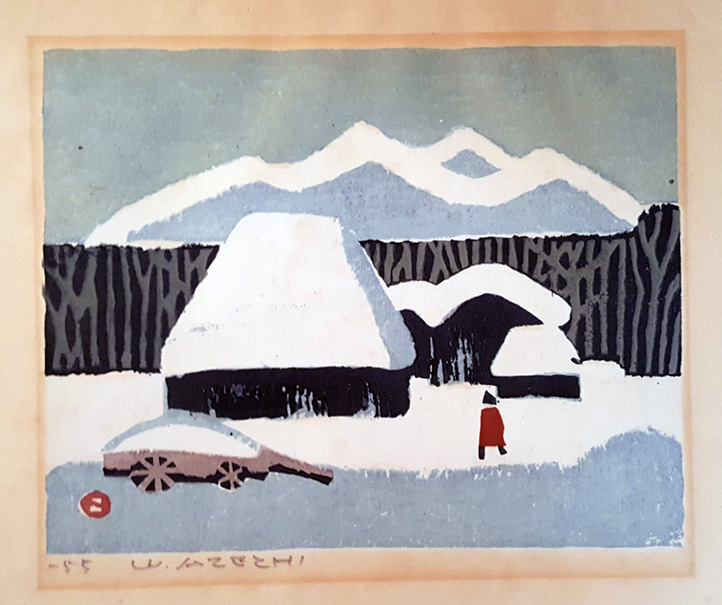 Country House in Snow by Umetaro Azechi. Beautiful Japanese woodblock print depicting a person standing in the snow next to a farm house. Pencil signed and dated by the artist. Dates to 1955.

Umetarō Azechi (畦地梅太郎, Japan, 1902-1999) was a sōsaku-hanga artist known for his bold and minimal prints based on the Ainu indigenous tribe of Japan and scenes depicting mountains and moutaineers.

Umetarō Azechi was born on December 28, 1902 in Uwajima, the Ehime prefecture on the island of Shikoku in Japan. Azechi was the son of two farmers and grew up in poverty. From an early age, Azechi taught himself how to draw and was determined to become an artist. In 1920, he moved to Tokyo and worked as a paper deliveryman while taking minor art courses. The “Great Earthquake” of 1923 hit Tokyo though and Azechi returned to his hometown. Despite leaving his life and art lessons in Tokyo, Azechi continued practicing his artistic abilities back home.

In 1925, Azechi eventually returned to Tokyo two years later. He found a government printing job where he had the tools and equipment to train as a printer. During this time in Japan, many artists were acting as their own carvers, printers, and distributors rather than printing through the jurisdiction of a publishing house, a movement known as the sōsaku-hanga (“creative print”) movement. Azechi soon approached the well-known and respected printmaker Un’ichi Hiratsuka (1895-1997) at Hiratsuka’s house to show his portfolio. Hiratsuka was impressed with Azechi’s work and introduced Azechi to two other artists, Koshiro Onchi (1891-1955) and Maekawa Senpan (1888-1960). Hiratsuka also gave Azechi access to gallery contacts and helped him enter exhibitions, including the Nihon Hanga Kyōkai (Japan Print Association) annual show. Azechi also participated in the Nihon Sōsaku-Hanga Kyokai (Japan Creative Print Association) exhibition, the College Women’s Association of Japan’s annual exhibition, and many international exhibitions in countries like England, Brazil, Germany, Switzerland, and the United States. By this time, Azechi quit his printing job and began freelancing full-time on newspaper, book, and personal print illustrations. Additionally, Azechi participated in all three print biennales in Sao Paulo, Lugano, and Tokyo. He also contributed his work to the book “One Hundred New Views of Japan” with other sōsaku-hanga artists.

By the late 1940s, Azechi produced a series of prints based on mountain scenes and mountaineers in simplified forms of bold and flat areas. Azechi dedicated his life to the mountains and would embark on summit climbs regularly up until his eighties. Azechi produced a couple of books about the mountains in Japan and the sport of mountaineering. Azechi’s other prints depict folk characters of people and animals rendered with flat, bold shapes and minimal detail based on the history and culture of the Ainu indigenous tribe. Azechi’s art appear to be or have been described by viewers as “primitive” or “rough,” whereas art historians and art critics believe Azechi’s style is “sharp” and “honed.” Azechi focused on each and every line and used repetition and balance in his work to highlight the subject matter. Additionally, Azechi wrote one book titled “Japanese Woodblock Prints: Their Techniques and Appreciation,” published by Toto Shuppan in 1963. Azechi’s work demonstrates mid-century modernism and early elements of graphic design - yet remains timeless.

Umetarō Azechi died in 1999 at the age of 97. Azechi’s prints can be found in numerous collections and major museums like the Art Institute of Chicago, Achenbach Foundation in San Francisco, Boston Museum of Fine Arts, Machida City Museum of Graphic Art, and the British Museum in London.