Masuo Ikeda (池田 満寿夫, Japan/China, 1934-1997) was known as a modern-day “Renaissance man,” or a maruchi taranto (“multiple talent”) in Japan. He broke the mold of the traditional Japanese archetype and was celebrated for his original and progressive work as painter, printmaker, sculptor, ceramicist, filmmaker, writer and director.

#2 by Masuo Ikeda (Japan, 1934-1997). Lithograph #2 from the portfolio "A Suite of Seven Original lLthographs by Masuo Ikeda". Published in 1971. This series of lithographs was pulled at the Bank Street Atelier, New York, in 1971. Published by Chikuma Shobo, Tokyo, 1971. Printed on Arches paper. Pencil signed and numbered by the artist. Limited edition numbered 119 of 200. 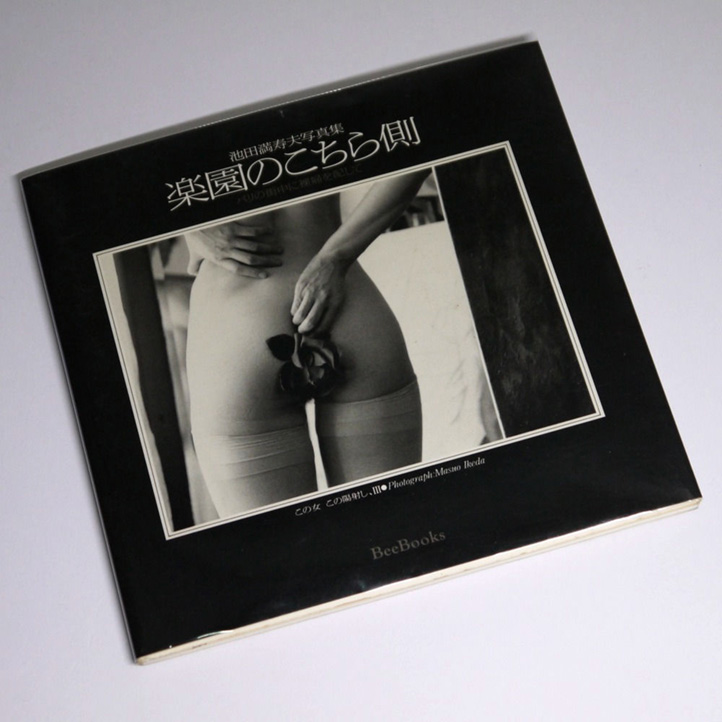 This Side of Paradise by Masuo Ikeda

This Side of Paradise by Masuo Ikeda. Signed by the artist. Published by Bee Books. Dates to 1990. 98 pages of black and white photos.

Masuo Ikeda (池田 満寿夫, Japan/China, 1934-1997) was known as a modern-day “Renaissance man,” or a maruchi taranto (“multiple talent”) in Japan. He broke the mold of the traditional Japanese archetype and was celebrated for his original and progressive work as painter, printmaker, sculptor, ceramicist, filmmaker, writer and director.

Masuo Ikeda was born on February 23, 1934, in Fengtien (also called Mukden and currently known as Shenyang), China – the largest city in the Liaoning Province. Ikeda and his family returned to Japan after the Pacific War when Ikeda was a child. He attended the Tokyo University of the Arts but failed his courses and dropped out. Ikeda had a difficult time shifting into a new country and fitting in. He was uninterested in the lessons and restrictions school enforced. He found interest in texts not taught in school including works by Camus, Kafka, Stendhal, Salinger, Sartre, and the Surrealists. He also was a self-taught artist, working on paintings and illustrations at home to catch up and re-enter art school. In 1952, he eventually graduated from the Nagano School of Art.

After graduation, Ikeda worked as a freelance painter and exhibited his work. However, he was not earning much of a living or winning prizes at shows. The artist took on printmaking at age 26 after a judge from one of the painting shows, German artist and engraver Erwin Graumann, urged him to do so. Printmaking allowed Ikeda to produce more work to sell and helped him find his creative niche and mark. The young artist took on traditional woodblock and serigraphy (silk screen) printmaking but began to focus on new techniques using methods like dry point, aquatint, photo etching, lithography and photolithography, and unconventional woodblock techniques - all made popular by the influence of Western printmakers like Stanley Hayter (1901-1988) and Birgiot Skiöld (1923-1982). Ikeda exhibited his prints in many shows in Japan, including the Tokyo International Biennale, and achieved critical acclaim. In 1961, he won the Grand Prize for Printmaking at the Tokyo International Biennale of Art. His success in Japan allowed him to branch out to international exhibitions in Europe, North America, and South America where he won numerous awards. In 1961, he was awarded the Prix d’Excellence at the Young Artists’ International Biennale in Paris, France. Three years later in 1964, Ikeda was awarded the Tokyo Museum of Modern Art prize. Additionally, in 1965, he won the Grand Prix (Grand Prize) at the International Printmaking Biennale in Ljubljana, Slovenia. A year later, in 1966, he also won First Prize at the International Engraving Biennale in Krakow, Poland as well as First Prizes at the Print Biennales of Venice, Italy and Vienna, Austria, where he was the second Japanese to win this category after Munakata Shikō (1903-1975).

In 1965, Ikeda moved to New York City. The same year, he had a solo show at the Museum of Modern Art (MoMA) in New York. Two years later, he showcased his prints at another solo show in Berlin, Germany at the height of the German hippie and pop movements. In 1976, Ikeda wrote his first novel, Eige-kai ni sasaguru (Homage to the Aegean), which won many acclamations and awards worldwide. A year later, he produced a film based on his novel. Additionally, in 1977, Ikeda won the Akutagawa Prize (Akutagawa Ryūnosuke Shō), presented by the Society for the Promotion of Japanese Literature for best-published literary story by a rising author, for Homage to the Aegean. Ikeda produced prints in his studio in New York from 1969 till the late 70s. Ikeda also wrote two more novels, Mado kara Roma ga mieru (From My Window I Have a View of Rome) and Manhattan Rhapsody.

Ikeda defied traditional and conservative Japanese canons of art. However, by overstepping the conventional boundaries of art making, Ikeda earned himself international recognition for his unmatched originality. His prints showcase a surrealist quality with a mix of figures (mostly women), abstract forms, and various printmaking techniques. Ikeda’s prints also display unique mark-making and line quality. Various other prints by the artist appear as experimentations and variations of color, texture, and composition that mirror advances in mid-century graphic design. The artist was forthright with his controversial and erotic subject matter that is often deemed as pornographic. His films also portrayed a number of nude scenes by actors and had to make numerous edits to his film due to strict censorship laws in Japan. However, Ikeda and his work is highly regarded today in Japan and internationally as a visionary and one of the best modern filmmakers of his time.

In 1980, Masuo Ikeda returned to Japan with his wife, violinist Yoko Sato (b. 1949). He took on sculpture and ceramics later in his life, creating work from 1983 till his death at age 63 on March 8, 1997 in Atami. The Ikeda Masuo Art Museum in Nagano, Japan was established after the artist and showcases a large body of his prints, photographs, and film. Masuo Ikeda’s work can be found in numerous collections and major museums worldwide including the Museum of Modern Art Museum (MoMA), Portland Art Museum, Harvard Art Museums, Art Institute of Chicago, Hiroshima City Museum of Contemporary Art, National Museum of Modern Art in Kyoto, and the Museum of Contemporary Art in Tokyo.