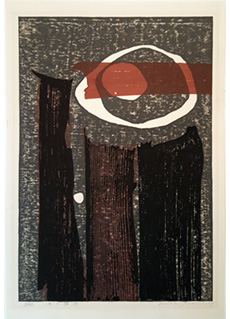 Reika Iwami (岩見禮花, Japan, b.1927) is a Japanese sōsaku hanga woodblock printmaker known for her striking abstract designs and compositions depicting elements of nature. In the 300-year history of woodblock printing in Japan, Iwami Reika is one of the first female printmakers to achieve the same status and worldwide recognition as male artists.

The Frame by Reika Iwami

The Frame by Reika Iwami (Japan, 1927). Contemporary Japanese monotype collage with Reika Iwami's signature woodgrains. A beautiful design within a design concept where each quarter of the collage has a unique palette and approach. When I look at it, the four seasons come to mind with each quarter depicting a seasonal tone. Pencil signed by the artist lower left. One of a kind print numbered 1 of 1. Dated 1975. 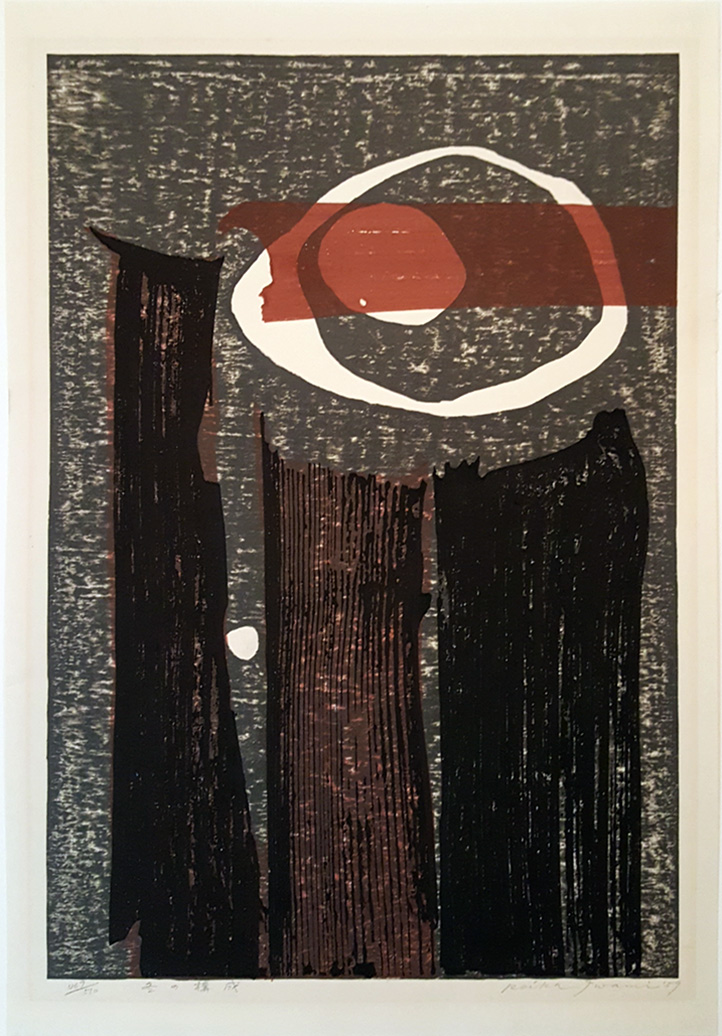 Winter Composition 2 by Reika Iwami (Japan, 1927). This print was one of ten chosen to be included in James Michener's book the The Modern Japanese Print: An Appreciation. Signed and titled in pencil by the artist. Dated 1959. Limited edition number 469 of 510.

Technical Details: Artist’s title: Fuyu no Kosei 2 (Winter Composition No. 2).  Four plywood blocks of basswood and lavan.  Printed on torinoko paper in three Japanese-style pigments plus sumi ink, with mica and gum arabic mixed into the black and red.  Two impressions for the gray background and one impression each for the black, the thick red, and the thin red.

Comments from the Artist: This is one of two prints by the same title; I personally prefer the No. 1. Since the deadline for the contest was the 1st day of December, I picked the theme of winter for my compositions.  It was partly with a feeling of resistance against the cold and cruel impression of winter that I worked on these prints.  What I wanted to express, however, was that even though winter is cold and severe, it is at the same time secretly nursing the buds of hope.

Reika Iwami (岩見禮花, Japan, b.1927) is a Japanese sōsaku hanga woodblock printmaker known for her striking abstract designs and compositions depicting elements of nature. In the 300-year history of woodblock printing in Japan, Iwami Reika is one of the first female printmakers to achieve the same status and worldwide recognition as male artists.

Reika Iwami was born in Tokyo, Japan and spent her childhood on the island of Kyūshu. In 1955, Iwami graduated form Bunka Gakuin College in Tokyo. She initially focused her artistic studies on oil painting. She also learned doll making with the National Treasure artist recipient Hori Ryūjo (1897-1984) for eleven years. Iwami later shifted her focus to printmaking after seeing and being influenced by Kōshirō Onchi’s (1891-1984) sōsaku hanga prints. In 1953 and 1954, Iwami’s perseverance and talent allowed her to study printmaking directly under Onchi’s associates Sekinō Jun’ichiro (1914-1988) and Shinagawa Takumi (1908-2009).

Iwami was an active member of artistic societies and showed her prints regularly. In 1953, she exhibited her prints with the Nihon Hanga Kyōkai (Japanese Print Association) and became a member with the group in 1955. In 1957, Iwami co-founded the Joryū Hanga Kyōkai (Women’s Print Association) with Chizuko Yoshida (1924-2017) and other professional women printmakers. She exhibited frequently with the College Women’s Association of Japan and showed her work in numerous prestigious print biennales including the British International Print Biennale in Bradford, England. Iwami also showed in numerous exhibits internationally. In 1962, Iwami’s print design Winter Composition No. 2 was included in the book The Modern Japanese Print - An Appreciation, a limited edition portfolio of ten original prints compiled by American author and Japanese print collector James Michener. The book launched worldwide recognition for Iwami and other artists like Azechi Umetarō (1902-1999), Watanabe Sadao (1913-1996), Masaji Yoshida (1917-1971), Haku Maki (1924-2000), and female printmaker Tamami Shima (1937-1999).

Reika Iwami creates her prints using various skilled printing techniques. Iwami is able to create stunningly balanced compositions by transmuting the grain of the woodblock and pieces of driftwood to the paper. This technique creates intriguing visual images and patterns. It also adds a dramatic layer of depth and texture that illuminates her chosen subject matter. Most of her prints utilize solid blocks of color and deep velvety black backgrounds. Iwami also includes sumi-e ink panting, embossing, and application of gold leaf, silver foil, and mica to her prints, which adds an appealing layer of metallic on the surface of the print. The artist is interested in depicting natural elements. Her most famous works muse the various forms of water such as waves, flows, rivers, and streams. Additionally, Iwami’s renderings of the seasons and the moon are prevalent in her bold and abstract prints. Iwami is also a haiku poet and incorporates her poetic expression through her visual work, similar to Kōshirō Onchi’s process with his Lyrique series.