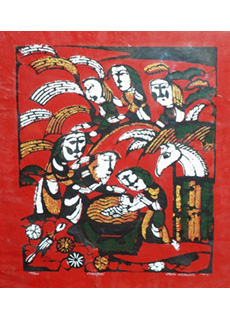 Sadao Watanabe (渡辺 貞夫, Japan, 1913-1996) was a Japanese printmaker and one of the most successful artists in Japan during the second half of the 20th century. Watanabe’s unique biblically themed prints produced by stencil printing in mingei (folk) style was recognized and made the artist famous internationally.

Three Marys at the Tomb by Sadao Watanabe

Three Marys at the Tomb by Sadao Watanabe (Japan, 1913-1996). Original Japanese stencil print. The image depicts three women visiting the tomb of Jesus. The theme of the print is Christian / biblical, similar to many of Sadao Watanabe's prints. From the series "New Testament". Dates to 1970. Marked with the artist's seal. Self-published. Signed and dated in pencil by the artist.

Woman of Canaan by Sadao Watanabe 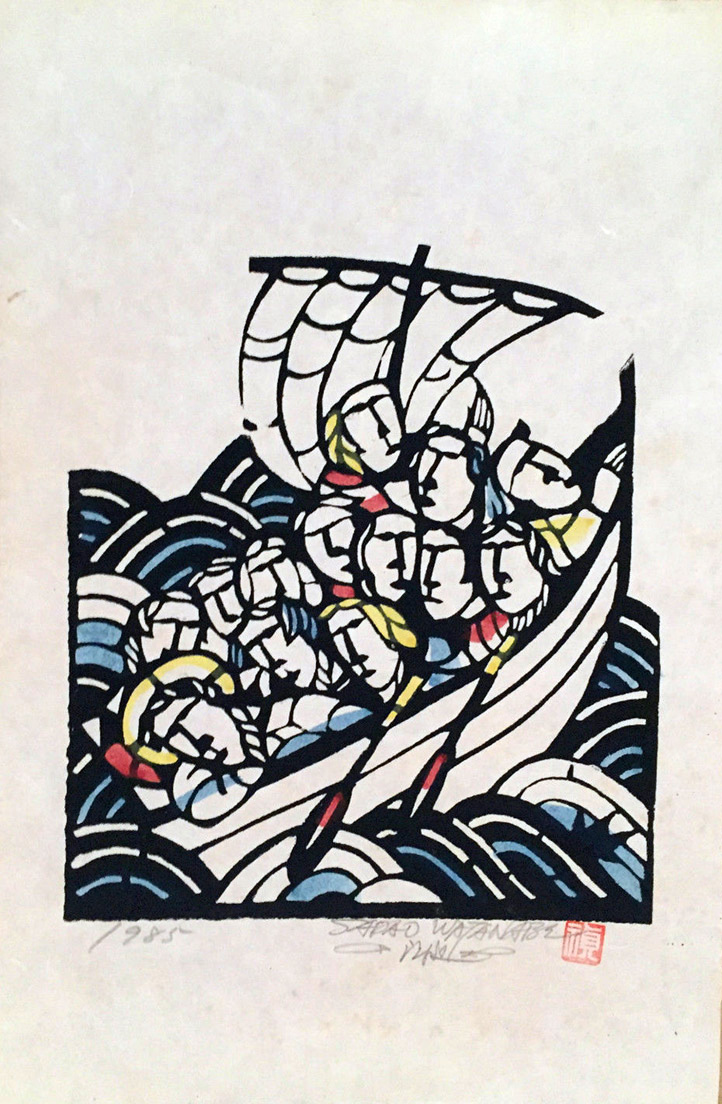 The Boat in the Storm by Sadao Watanabe 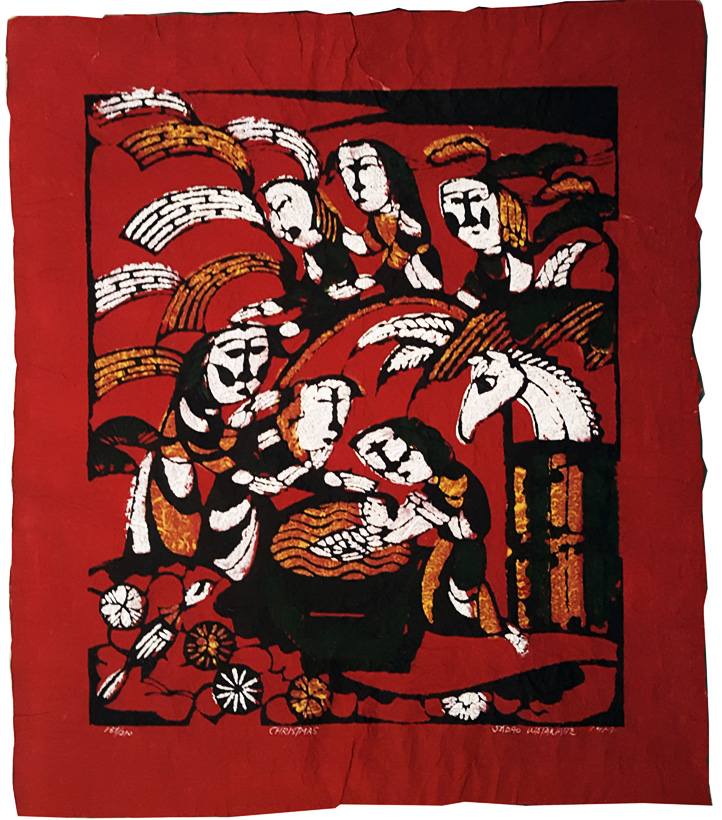 Christmas by Sadao Watanabe. Folk art style Japanese print featuring one of the nativity scenes. This Mingei style of printing that Watanabe employed is an old method using crumpled paper and soybean milk paints to create a folky or even a stained glass effect. Dated 1964. Limited edition numbered 157 of 210.

Sadao Watanabe (渡辺 貞夫, Japan, 1913-1996) was a Japanese printmaker and one of the most successful artists in Japan during the second half of the 20th century. Watanabe’s unique biblically themed prints produced by stencil printing in mingei (folk) style was recognized and made the artist famous internationally.

Sadao Watanabe was born on July 7, 1913 in Ushigome, Tokyo, Japan. Sadao lost his father when he was just 10 years old. In his teens, the young artist began apprenticing for artist and textile dyer Serizawa Keisuke (1895-1984) alongside artist Yoshitoshi Mori (1898-1992). Serizawa Keisuke, a leader of the mingei movement, a group of artists dedicated to producing traditional Japanese craft and folk art, and master of stencil-dyed books who received the Award of Cultural Merit from the Japanese government in 1977. Under Keisuke, Sadao learned stencil dying techniques used for kimonos, a practice called katazome that originated in the Okinawa region. He also learned from Keisuke the practice of kappazuri, a traditional Japanese stencil printing method. Later, Sadao studied under Yanagi Soetsu (1891-1961), a leading member of the mingei movement.

Sadao began to take in interest in the Christian religion and based his prints off of Biblical figures and stories. Japan was predominantly a Buddhist country historically. In 1543, Portuguese Christian missionaries began to evangelize the lower classes of Japan. Throughout the centuries, civil wars were fought between Christians and Buddhists with Christianity slowly in decline. Less than 1% of Japanese practiced Christianity in the 20th century - the same trend found today in Japan. Sadao was one of the few Japanese who outwardly practiced Christianity and was baptized in 1930. Sadao dedicated his life to studying the Bible and producing art as a means to spread the religion’s scripture. He attributed his overcoming of tuberculosis at a young age as one of the main reasons he practiced his faith and incorporated it in his art, stating “I owe my life to Christ and the gospel. My way of expressing my gratitude is to witness to my faith through the medium of biblical scenes.”

Sadao’s took an interest in the religious art of the European Middle Ages, including stained glass and illuminated manuscripts, which he attempted to recreate and appropriate through stencil printing. His choice of jewel-tone colors, flat and rigid depictions of forms and figures, and large sheets of paper, alluded to the illuminated manuscripts and iconographic imagery created by monks living in secluded monasteries. Sadao listened to Gregorian chant music, modeling his practice of creating art to monks. He also believed his ability to create art was partially attributed to God channeling through him during each process of creating the prints, once professing, “profound faith will inevitably assume the form of profound beauty.” Seamlessly blending and attributing his Japanese heritage in his prints, Sadao included aspects of Eastern culture in his prints. In his depiction of The Last Supper, Sadao depicts the disciples sharing a meal of sushi. In the print showcasing the story of Noah’s Ark, Sadao includes signs from the Asian zodiac, including the dog, horse, tiger, ox, sheep, and roosters.

Sadao used his knowledge of stencil printing from his formative artistic years as student and practiced it throughout his life as an artist. His wife Harue Yoshimizu (dates unknown) aided with the process of stencil printing, mixing the soybean and rice paste that acted as a binder for the ink and stencils. Sadao used shibugami paper, which was composed of multiple layers of kozô paper laminated with persimmon tannin. The sheets of paper are dried and smoke-cured to adhere the material. This process makes the paper waterproof, flexible, and strong. The stencil design is created by carving into the paper with a sharp knife, creating the omogata, or equivalent of a woodblock in stencil printing. From the initial design, Sadao made several color stencils. He reinforced the thin lines with silk gauze and brushed on layers of ink while protecting the white space of the paper with a color-resistant paste called noribuse. Once all of the color impressions are applied to the paper surface, Sadao applied the key impression. Ink layers are transmuted to the paper and the print is submerged in water to wash away the paste and hang-dried, a process called mizumoto. Sadao printed on thin, wrinkled sheets of paper called momi-gami. He signed and sealed his prints, which were typically produced in limited editions due to the limited number of prints that can be produced from stencil printing. What makes stencil printing so unique is that no two prints are alike. Each print displays a slight difference in the pressure of the brushstroke, texture of the paper, alignment of the stencil, and opacity of the ink.

Sadao Watanabe maintained a comfortable life producing prints. His popularity grew over time and the artist was recognized at many exhibitions. In 1943, Sadao exhibited his first Biblical print titled The Story of Abraham at the Tokyo Prefectural Craftsmen show. In 1947, he received the first Japan Folk Art Museum Prize for his print Story of Ruth. In 1956, he won the Japan Print Academy Prize for the piece Girls and Quails. Additionally, in 1958, Sadao received First Prize for his depiction of Moses with The Bronze Serpent at the Modern Japanese Print Exhibition held at St. James Church in New York City. In 1962, Sadao showed his prints The Shepherds and The Shepherds Look at the Star at the Tokyo International Biennale Print Exhibition. James Michener, author of The Modern Japanese Print (1962) book that introduced ten sōsaku-hanga artists to the Western world, included Sadao’s print Kiku (“Listening”) (1960) to the curated collection. Other publications such as Sandra Bowden’s book Beauty Given Grace (2002), American Bible Society’s Printing the Word: the Art of Watanabe Sadao (2000), Shinkyo Publishing’s Biblical Prints by Sadao Watanabe – All Thy Marvelous Works (2013), and others dedicate and preserve Sadao Watanabe’s artwork and legacy. In 1981, Sadao Watanabe received an honorary doctorate from Linville College. In 1985, the Academy of Arts in Honolulu, Hawaii, and the Art Gallery of Greater Victoria in Canada held retrospectives of Sadao’s expansive oeuvre.

Sadao Watanabe died on January 8, 1996 at age 83 in Tokyo, Japan. Sadao’s work can be found in numerous collections like the Vatican Museum in Vatican, Italy and the White House in Washington, D.C. and major museums worldwide including the Achenbach Foundation for Graphic Arts in San Francisco, Art Institute of Chicago, Cincinnati Museum of Art, Museum of Modern Art (MoMA) in New York, British Museum, Folk and Craft Museum in Tokyo, and the National Museum of Modern Art in Tokyo.