Black Skulls Square for BLM by Takashi Murakami (Japan, 1962). Silkscreen print depicting Murakami's signature skull design executed on a powerful black background. All proceeds from this design where donated to organizations supporting the Black Lives Matter movement. Printed in 2020. Limited edition from an edition size of 300. Signed bottom right by the artist.

I have said that a role of an artist is to discern the present and express it for the future audience. But if my art can effect any change here and now, I want to contribute it not only to give back but to give power to the Black community plagued by the racial injustice.

And so I decided to produce a series of prints for sale, to donate the entire proceeds to the U.S. organizations fighting for social justice and racial equality. In order to get directly engaged in the movement that is taking place in America, I asked @NTWRK to be my partner for the project.

I will be releasing six black prints featuring my quintessential flower and skull designs, each edition of 300, through @NTWRK. Each print will be silkscreened and I will finish the individual work with spray paint.

I am in discussion with NTWRK to arrange for 100% of the sales to go to various organizations dedicated to changing the systems oppressing the Black community, including @blklivesmatter, @eji_org, and @colorofchange. 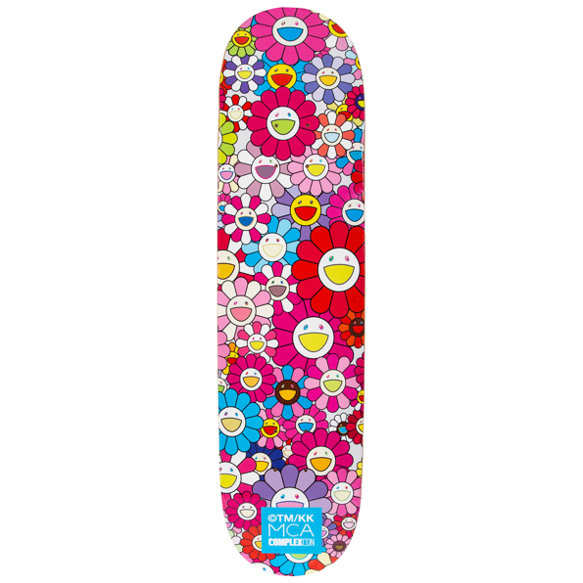 Size: 32" x 8"
Condition: Excellent condition. Has been removed from wrap. 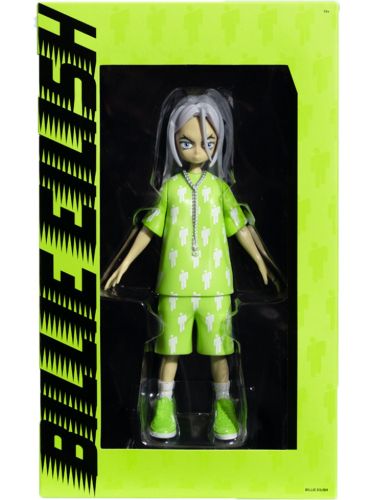 Billie Eilish by Takashi Murakami (Japan, 1962). Limited edition vinyl figure. Inspired by the music video for "you should see me in a crown".

Murakami holds a BFA, MFA, and a PhD in Nihonga (Japanese-style painting) from the National University of Fine Arts and Music, Tokyo. Since the early 1990s, he has used classical Japanese painting techniques to develop cute and sometimes dark cartoon characters, which are symbolic of the complex issues underlying the violent, technological, and fantastical aspects of Japanese subcultures. The sensory overload of his cartoony figures and compositions are inspired by a wide range of sources from traditional Japanese iconography to commercial designs. Mr. Dob, the artist’s most popular character, is inspired by the cartoons Doraemon, Sonic the Hedgehog and Mickey Mouse, and also often serves as a stand-in for the artist in paintings and installations.

In 1996, Murakami established the Hiropon Factory, a studio-workshop that evolved into the art production and artist management company Kaikai Kiki Co. Ltd. Operated out of Tokyo and in Brooklyn, Murakami established Kaikai Kiki to support the production and exhibition of works by artists similarly informed by Japan’s unique popular culture. Murakami’s production through Kaikai Kiki extends to mass-produced items such as toys, key chains, and t-shirts sold at Japanese convenience stores as well as collaborations in the fashion and music industries with artists from Kanye West to Billie Eilish and Louis Vouitton to Supreme. This factory model and prolific production are modeled after and perhaps only rivaled by pop artist Andy Warhol (1928-1987).

By the mid-1990s the artist coined the term superflat to theorize the distinctive “flatness” of space in Japanese visual culture from traditional painting to contemporary practices. With its emphasis on the two-dimensionality of all art, the concept of superflat complicates orientalist art historical narratives centered on western tradition and “melts” away the distinctions between high and low culture. The artist’s explorations of superflat also seeks to explain how postwar Japanese artists’ appropriation of consumer culture is employed to resolve historical traumas. Murakami interprets Japan’s infantilization and fixation on cuteness in popular otaku culture and visual arts is rooted in the country’s defeat in the Pacific War (1932-1945), the atomic bombing of Hiroshima and Nagasaki, and its political and economic dependence on the United States.

During the early 2000s, Murakami curated a series of exhibitions that took up superflat as a theoretical framework to introduce the multifaceted cultural, historical and socio-political conditions that shape the work of contemporary Japanese artists: Superflat at the Museum of Contemporary Art, Los Angeles (2001), Coloriage at the Fondation Cartier de l’art contemporain, Paris (2002), and Little Boy: The Arts of Japan’s Exploding Subculture, at the Japan Society, New York (2005), which also featured a series of public art installations throughout New York City in collaboration with the Public Art Fund.

In 2010, Murakami was invited to exhibit his work in conversation with the Rococo masterpieces at the Palace of Versailles, Île-de-France, France where he explored the “exaggeration and transformation” of historical places such as Versailles in popular imagination. Following the Tōhoku earthquake and Fukushima Nuclear Disaster of 2011, Murakami shifted his focus to creating works derived from Japanese Buddhist iconography that explored the ameliorative function of art. These works were featured in his first solo-show in Japan at the Mori Art Museum, Tokyo in 2015.

Murakami’s 2017 exhibition at the Museum of Fine Arts, Boston, Takashi Murakami: Lineage of Eccentrics, revisited the tensions between traditional and contemporary in Japanese art as a result of a nearly decade-long collaboration between the artist and his mentor, art historian Nobuo Tsuji. Co-curated by Murakami and Tsuji, the exhibition featured works from the museum’s collection by a group of 18thc. Japanese painters known as the Edo eccentrics in conversation with Murakami’s paintings. The Museum of Contemporary Art, Chicago also held a major retrospective of Murakami’s painting in 2017, Takashi Murakami: The Octopus Eats Its Own Leg. The retrospective highlighted the artist’s attention to materials and seamless integration Japanese traditions with the contemporary influences of globalization, media culture, and nuclear power.

Murakami’s work continues to complicate art historical narratives and transcend simplistic categorizations in style, presentation and media, making him one of the most influential artists of his time. His support for emerging artists and commitment to curating and presenting work outside traditional art spaces emphasize his strong belief that art should not exist in isolation from the rest of culture.