Hiroshi Yoshida and his Early Access to the Western World

Hiroshi Yoshida (吉田 博, Japan, 1876-1950) was a prolific Japanese printmaker who broke through the cultural barriers that separated the Eastern and Western worlds. He became one of the first established Asian artists to show extensively in the West and contribute to the artistic milieu of the 20th century. Hiroshi trained as a shin-hanga (“new print”) artist during his early years, learning Western-style techniques of rendering light, color, and atmospheric depth. He also abided by depicting traditional Japanese themes of landscapes (fukei-ga), famous places (meishō), beautiful women (bijin-ga), kabuki actors (yakusha-e), and birds-and-flowers (kachō-e). However, Hiroshi never imitated Occidental art or methods of creating it. Instead, the artist innovated his own unmatched creative and progressive direction that his remarkable and coveted prints showcase today.

Hiroshi Yoshida’s first Western and American exhibition was held at the Detroit Museum of Art (now Detroit Institute of Art) with the aid of American art collector Charles L. Freer, who previously bought a watercolor from Hiroshi in Japan. Freer’s steadfastness to discover, introduce, and highlight art from the once secluded Empire of the Sun provided Hiroshi an opportunity unlike any Japanese or Eastern artist before him. In 1899, Hiroshi left Japan for the first time and traveled to the United States with fellow artist Nakagawa Hachiro (1877-1922). Aside from Detroit, Hiroshi and Hachiro exhibited their paintings at the 1905 St. Louis World’s Fair and exhibitions in New York, Boston, and other major cities, financing their trip with the money they received from the sales of their paintings. After his time in the States, Hiroshi extended his trip to Europe and Asia before returning home. He entered his work in the International Exposition in Paris in 1900 and the Japan-British Exhibition in London in 1910, winning awards in both cultural shows. Hiroshi traveled around the world again beginning in 1923, sketching well-known landmarks and natural scenes including the Alps, Taj Mahal, Niagara Falls, and the Grand Canyon.

Through his travels, Hiroshi gained insight on the Western world’s misled understanding of the art of the Eastern world, especially the traditional art of Japan. The demand for ukiyo-e prints was increasing in the Western world, but high-quality prints were drowned in the market with lower quality prints that were disseminated for commercial consumption. Determined to present a more accurate and ideal representation of Japanese art, Hiroshi focused solely on the indigenous Japanese practice of woodblock printmaking. Applying his incomparable ability to depict atmospheric and ethereal scenes with color and various print techniques, Hiroshi was able to create prints that resembled the mastery of his watercolor paintings. He used up to thirty blocks of cherry wood per print to achieve the effect. Hiroshi integrated his prior knowledge of painting and printmaking methods and took them one step further, developing new print techniques and experimenting with aspects of both mediums. He used multiple print techniques, like using zinc plates to achieve delicate lines for detail in addition to transmuting woodblock impressions on paper. Hiroshi is also known as a master of modern-day printmaking for his development of overprinting, the act of repeatedly printing colors on top of each other to add depth to his work. Additionally, the artist’s transformation of the traditional shin-hanga printing practice brought a new meaning and modernization to the Japanese printmaking process. Hiroshi later assumed complete control over his work. He justified this artistic shift writing: “the production of the finest woodblock color print, the creative art and vision of the artist is needed not only in the sketch but in the cutting and printing as well. Only in this way can continuity be assured and the vitality and power of the artist be shown in full in the final result.” By merging traditional and modern techniques, styles, and worlds, Hiroshi’s work was radical and revolutionary.

Hiroshi’s ability to depict atmospheric depth and light like Western artists through traditional Japanese and pioneering techniques makes him a true tour-de-force, blending and advancing the artistic cultures of the Occident and the East. In a 2017 interview, Roni Neuer, art advisor of Hiroshi Yoshida’s art and co-founder at Ronin Gallery, stated, “Yoshida is, for the early 20th century, one of the top two artists that did landscape prints. Yoshida and Hasui Kawase revitalized the traditional Japanese landscape print.” Hiroshi created prints until his passing on April 5, 1950 after he returned home from a sketching trip to the Japanese Izu and Nagaoka mountains. Although Hiroshi produced an impressive and extensive collection of prints in his life, it was recorded that he had plans to travel once again in his old age to destinations like New York, Boston, London, and Italy, to capture the changing modern landscapes and energy. Hiroshi Yoshida shaped an artistic legacy that continues to inspire artists and admirers worldwide. His family of an ongoing three generations continues to promote his art and practice their own work in his honor. 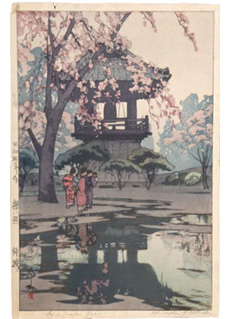